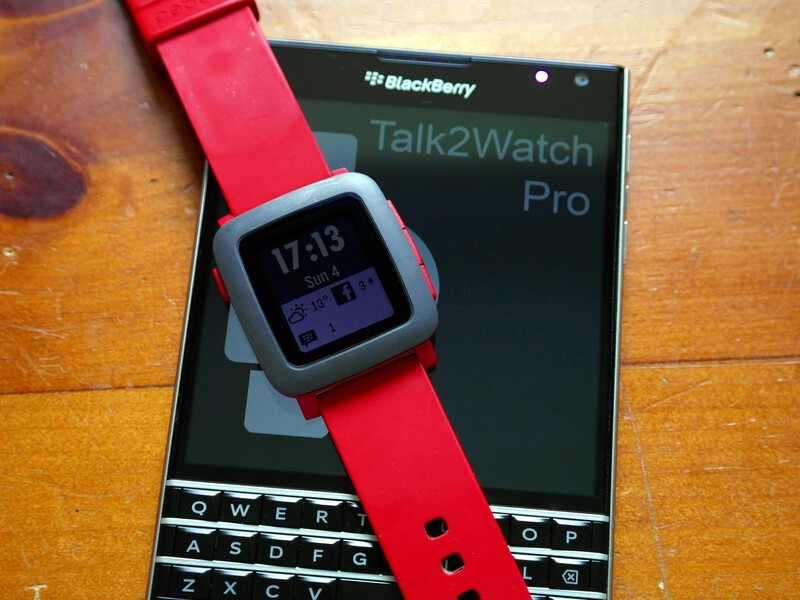 The Pebble (and Pebble Time) smartwatches are not officially supported on the BlackBerry 10 platform but with the help of a great developer, we have a great third party client in the form of Talk2Watch Pro. While there is a free version (Talk2Watch) to help you get your feet wet, you really want to dive in and get the pro version if you really want to get the most out of your Pebble smartwatch purchase. For a long time, users have been wanting headless integration and it has been something the developer has worked on and has finally figured out a way to add.

There are a few things to note with the headless version. All headless apps have a limit in the amount of memory it can access, if it goes beyond that then the app will crash. Which was one of the problems the developer was having. So, the developer had to make some adjustments in order to get headless integration working well. What this means is that while there is headless integration there will be some limitations.

First off, in order to use the headless function, you have to turn on the feature through the app settings. Just swipe down from the top when you're in Talk2Watch Pro and tap Settings, then tick the Run headless box. You will then need to restart the app. Just simply close it and re-open it. When you open it up you should get a toast notification that says Headless service running. You can then close the app and continue to receive notifications. However, due to the memory limitation on headless apps, if you have the headless function running you will only be able to receive SMS, Email and Phone call notifications, as well as have music control. If that's what you want then you're good to go. If you make use of Scripts, active watchfaces or Timeline Pins on the Pebble Time, then you will still have to keep the app open in an Active Frame and don't turn on the headless option.

This latest version will show as v30.0.8.0 in BlackBerry World. The update also includes Blaq integration, so if Blaq is your preferred Twitter client, your Blaq notifications can be pushed to your wrist. At the moment it is only available if you have the latest Blaq beta version available through BlackBerry Beta Zone. Another thing included in this update is improved Bluetooth implementation where there will be endless re-connection attempts.

If you already own Talk2Watch Pro then updating is free. If you haven't already purchased Talk2Watch Pro, you can download it for $4.99. Talk2Watch Pro is available for all BlackBerry 10 smartphones. As a side note if you make use of Hub2Watch for extra functionality, it will work with the headless element of Talk2Watch Pro. There is also an active thread in the forums which you can visit, the developer is very active in there and responds to queries in an efficient manner.