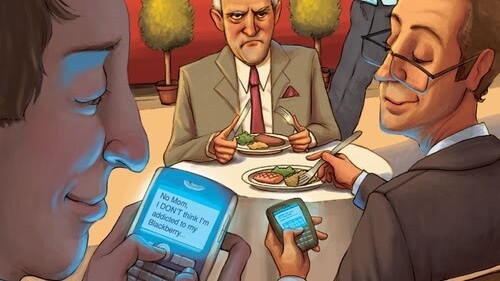 It's 2005 and a young man named Erik Slaven, living in Los Angeles, just purchased his very first smartphone, the BlackBerry 7250. Although he was never a fan of cell phones, the addiction was immediate and Erik suddenly possessed mobility power over those still attached to desktop computers. "It was awesome and empowering to be able to email anyone from anywhere." Erik proclaimed. He believed the BlackBerry device changed everything. "I would sometimes email friends just for the sake of emailing. It was that cool." Erik recalls. Although web browsing on any mobile device at the time was poor and sluggish, Erik realized that the smartphone revolution had begun and Research In Motion was leading the way. "I knew it was only a matter of time until the technology was perfected."

Research In Motion, a company that saw its start in a tiny Waterloo office above a bagel shop in 1984, was unusually ran by two CEOs Michael Lazaridis and Jim Balsillie. But the two of them were somewhat of a dynamic duo with Mr. Lazaridis focusing on engineering, product management and supply chain while Mr. Balsillie took care of sales, finance and corporate functions. Essentially, Mike developed the devices and Jim sold them. In 2005, RIM stocks were on the rise as well as their customer base (2 million) and sales ($410 million). Their market value was about $14 billion. RIMs competitors were PalmOne, Nokia and Motorola running on software from Microsoft.

"...the smartphone revolution had begun and RIM was leading the way."

Two years later Erik still had his BlackBerry but recalls the debut of Apple's offering, the iPhone. "I remembered showing little interest. It was unsubsidized and unusually expensive for the time, and although Apple had truly developed a modern mobile browser, I was confident that RIM would soon eclipse it. Plus, the iPhone only operated on 2G and had this weird virtual keyboard. How can I knock out emails on that thing?" Erik dismissed the iPhone and decided to upgrade to a Curve 8310. With its modern design, better screen than his previous BlackBerry and trackball, it was serious innovation to him.

For Mike Lazaridis, he couldn't fully understand the iPhone. It prompted him to buy one so he could examine it further. To his shock he saw that Apple had virtually put a Mac computer inside a cellphone. Mr. Lazaridis realized the iPhone broke all the rules as the device used two processors and the OS took up 700 MB compared to a BlackBerry that used one processor and a mere 32MB. The iPhone also had a fully capable web browsing experience something, up until that point, carrier networks didn't allow due to the strain on their systems. "How did they get AT&T to allow that? It's going to collapse the network." Mr. Lazaridis thought. And in fact, some time later, it did.

Erik Slaven had eagerly waited a whole year for the debut of RIMs answer to the iPhone in 2008, the BlackBerry Storm. "I remember seeing a billboard teasing the upcoming Storm and couldn't have been more psyched. RIM had been flawless up to that point, so the Storm was going to be the first nail in Apple's coffin. But then I bought it."

A year before this, Verizon approached RIM to specifically create an "iPhone killer" device. AT&T had exclusive rights to sell the iPhone at the time and its sales were threatening Verizon. If RIM could make a phone that "killed" the iPhone then Verizon wouldn't have to worry about losing customers and sales to its rival. RIMs device would be full touchscreen and Verizon was going to back the U.S. launch with a massive marketing campaign.

However due to deadlines, "the technology was cobbled together quickly and wasn't quite ready," said a former senior company insider who was involved in the project. Because of the pressure and time constraints RIM could not create the phone that Verizon banked on. The Storm was months late and became something customers hated. It was slow, buggy, difficult to use and consumer returns were high.

Despite this, RIMs CEOs publically spoke against the iPhone's short battery life, weaker security and initial lack of e-mail. According to Lazaridis and Balsillie,"That's marketing. You position your strengths against their weaknesses."

The consumer market was becoming the fastest growing segment; an area RIM never had interest in nor paid much attention to.

Months later, Erik decided to purchase an iPhone 3G. "I was very impressed with the browser and overall performance. The touchscreen was very responsive and as they said, 'everything just worked.' I also really liked the form factor. It was clear that this was the breakthrough in the industry." Still though, Erik retained his love for BlackBerry as he preferred the BlackBerry form factor but wanted a blend of BB hardware with iPhone performance.

RIM was still very profitable in 2008 boasting double the revenues and profits, to $6 billion and $1.3 billion, respectively than the year prior but this is also where their growth started to wane. The consumer market was becoming the fastest growing segment; an area RIM never had interest in nor paid much attention to.

"RIM was coming back and I thought they'd remedy all of their previous missteps. After all, sometimes you just need to learn from mistakes. But in 2010, the iPhone 4 debuted with its all metal and glass design, and a fit and finish that put every other smartphone to shame." Erik remembers.

It was during this time when Mike Lazaridis understood that in order for RIM to remain relevant and competitive in an ever-changing market, it had to change its DNA. This is the year where RIM acquired QNX. But this posed more challenges to the company who were already struggling to compete in the consumer market especially with a major new competitor, Google.

"The problem wasn't that we stopped listening to customers," said one former RIM insider. "We believed we knew better what customers needed long term than they did. Consumers would say, 'I want a faster browser.' We might say, 'You might think you want a faster browser but you don't want to pay overage on your bill.' 'Well, I want a super big very responsive touchscreen.' 'Well, you might think you want that but you don't want your phone to die at 2 p.m.' "We would say, 'we know better, and they'll eventually figure it out.'" But this never happened as consumers didn't care about battery life or security features. They wanted apps. RIM in response created BlackBerry App World to accommodate the growing trend in the consumer market but found itself split. On one end there were corporate users who didn't want apps, cameras, music, etc. on their devices and on the other end consumers were demanding these features. RIM, despite all its efforts, couldn't satisfy either set of customers.

A confused and frustrated Erik Slaven admits at the time, "Apple and Google had outstanding, reliable and fun-to-use phones at this point, with amazing apps and 4G data speeds. It was hard to justify using a BlackBerry." Consumers were not aware that RIM on the back-end was divided between the developments of a QNX based OS and the well established but technically complex Java-based OS they were currently using. Delays and mounting difficulty became common as there were never-ending debates regarding direction and vision among management. Mr. Lazaridis wanted to build from scratch while others wanted to transfer over some of its former Java-based applications on top of QNX. The debates over decisions were time consuming and discussions among the senior leaders in Mr. Lazaridis' organization dragged on for a year.

"RIM was like the old athlete that continued to play well past its prime, simply getting embarrassed by the new generation."

"The browser on all RIM phones had fallen so far behind, that I couldn't use one on a regular basis until there was a radical change. I thought BB6 would finally catch up to Apple and (now) Android, but the browser was still very inferior and the software was buggy. RIM was like the old athlete that continued to play well past its prime, simply getting embarrassed by the new generation." According to Erik.

"It wasn't until the Bold 9900 and BB7 that I took RIM seriously again. It was an amazing phone with an iPhone-like build quality, and the browser was finally usable. There was a touchscreen and a replaceable battery, and even a micro-SD slot. I couldn't have been more excited but then I realized the camera didn't have autofocus. I also tried the all-touch Torch 9850 but the screen was made out of plastic, not glass." In the same year, RIM fell from being a leader in the smartphone industry. Their stocks plunged at an alarming rate and shares were down at their lowest level since January 2004. Rumors began to swirl about the company's future while a strained RIM struggled to develop the Playbook and BB10. "Buying QNX was the right play ultimately," said Patrick Spence. "But we didn't make the turn fast enough. Everyone underestimated the complexity involved in building the new system."

A constant issue was that a new team was created to build BB10 and also for the Playbook but those who helped build the original system were also still working on BBOS 7. Everything became delayed and RIM ended up rushing out unfinished products to meet expectations. "We had bought a powerful operating system and needed to move to it. But the BB7 was late," Mr. Lazaridis said. "Every week, I was getting requests for more hires, more resources. The conundrum was how do I pull resources off the BB7 to rewrite all the apps on top of QNX?"

By 2013, Former CEOs Mike Lazaridis and Jim Balsillie were gone, RIM was renamed BlackBerry, BB10 launched and later in the year, the company was up for sale. With about 1% of the market share in the United States and less carrier support, BlackBerry's market value currently sits around 4 billion dollars. "RIM just couldn't get it right and everything was late. They were unable to deliver anything on time. Not even close. From the original Bold 9000 to the PlayBook to the BB7 phones to BB10, everything was severely delayed. When products finally hit the market, they were often half-baked. The PlayBook didn't have email (which almost seems like a joke), the BB10 software lacked many basic features from BB7, and so on. It got to a point where I wasn't going to miss out on the post-PC revolution because of a sentimental attachment to BlackBerry. They simply let me down." Erik says.

Today, Erik Slaven owns a Q10 and an HTC One (M8). He remains an active member of CrackBerry (Camera531) and still follows BlackBerry.

I would like to personally thank him for sharing his story. I hope this write-up inspires everyone (and BlackBerry) to never lose sight of your identity, always focus on your vision, follow your passion, never compromise and no matter how difficult things may be, never give up. BlackBerry still lives and as long as their story continues, CrackBerry will be there to tell it.

"A house divided against itself, cannot stand." – Abraham Lincoln.