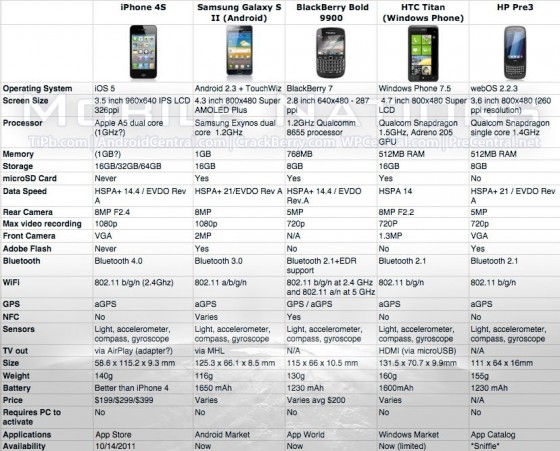 With another Apple iPhone announcement now behind us, it's time for an updated specs comparison chart pitting the latest offering from Cupertino against the competition.

It's not an iPhone 5, but rather an iPhone 4S that was announced. The device looks identical to the iPhone 4, but features some upgraded internal specs. The processor is now dual core. The camera is now at 8 megapixels with 1080pm video recording. The battery is said to offer longer battery life and the graphics processing is much faster. A first for iPhones, a 64GB version of the phone is now available too. It still doesn't have a physical keyboard or a blinking red light. And it looks identical to the iPhone 4. Oops, did I say that twice? Yeah, I meant to. :)

It's definitely the best iPhone to date, and the specs jump ahead of what BlackBerry 7 Smartphones are offering, but with the iPhone 4S Apple didn't really to do much to leap ahead. As our friend @philnickinson said while we were talking on TiPb's live blog... they caught up to where Android was for specs 6 months ago.

The new Siri artificial intelligence stuff Apple demoed was cool, but again, it's a demo. I'm not sure how it will pick up in real world use (Facetime made for a great demo too but you don't see Apple giving Facetime stats as the usage rate is sooo low in the real world).

You almost get the sense Apple pulled off today what RIM has often been criticized of in the past - an incremental update to a mainly similar phone. Or maybe I'm just being harsh here since Steve Jobs wasn't at the show.

Whatever the case, be sure check out the chart above for the full comparison (click image for larger version). I can't wait to update the comparison chart while at DevCon with some BBX BlackBerry SuperPhone specs. That'll even things out. For more on the iPhone 4S, head over to TiPb.com for all the coverage.