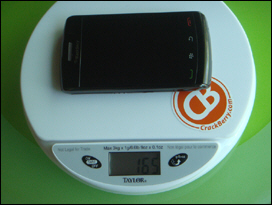 BlackBerry Storm 9550 Weighs in a Little Heavier Than Its Predecessor

Yesterday's The Tale of the Scale post got some really interesting comments, from bored much Kevin? to I like my phone with a little extra heft - more to love and my personal favorite, if you're complaining about a gram or 2..... get a gym membership! I even got a tweet saying I was on crack to think the 9550 weighed in heavier than the Storm 9530. I think the best comment came from member NDonline though, who noted it's nearly 2010 and I should really invest in a digital scale as it would likely be more accurate and easier to read the numbers. Touché. Consider it done, and I'm back with a new crack(berry) scale and a second set of more refined results. The table below sums up the findings and you can click the images (more below) to zoom in on the scale to see the weights (in grams) for yourself:

So there you have it. The Storm 9550 is a bit of a porker. Personally, I'm of the same nature as many others out there who prefer a device to be on the heavier side. It gives off that feeling of durability, quality and makes it feel more tool-like vs. some cheap gadget manufacturered using parts supplied by the lowest bidder. The point of this exercise wasn't too harp on the Storm 9550's heft (though it is kind of fun to do so), but simply to answer with some actual evidence the question that has popped up several times in the Storm II forum asking whether the device weighs more or less than the first Storm. So while the answer is that the 9550 does weigh more than the 9530, in my opinion it feels a lot better in the hand despite the few extra grams, which I'm certain you'll agree with once you get your hands on one.

Done. That's it for the discussion of weight. Unfortunately, that means now it's back to the WAIT. Come on RIM / Verizon / Vodafone... let's get this phone announced and released!!

So How's that for a Crack(Berry) Scale??