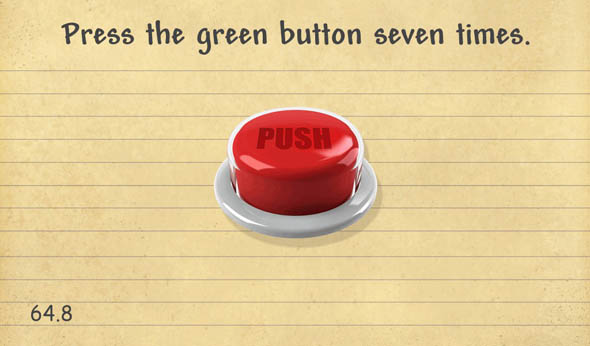 I bet you can't count how many times you, or someone you know has said that something is stupid. More specifically, they call a game that they just can't figure out stupid. Now think about it; why is it so stupid? You were the one who failed, so maybe you are the one to be called stupid. Nitwit. Idiot. What? You say you aren't any of those? Then prove it- challenge it! Take the Moron Challenge, dumb dumb.

The Moron challenge for the BlackBerry PlayBook is a game that is simple in concept, but may be trickier than you would initially think. The game preys upon how easily you are misdirected, whether it's by images or though misread instructions. The game includes checkpoints/levels of intelligence which are, more or less, compliments on your amazingly astute grey matter. If the game play isn't enough to keep you on your toes, the timer at the bottom left corner of the screen certainly will. It's almost as though you need to find the perfect balance between speed and, well, not being a moron. I got caught on a few challenges that, later, made me say "I'm a moron", once I figured them out. The Moron Challenge is available in two flavours- The free version allows you to play up to the first checkpoint, solidifying the fact that you have the intelligence of a mosquito. If you think you're smarter than that, you can buy the full version for only 99 cents. Both are available from BlackBerry App World, nimrod.