“You are the best of the best - Can you defeat the enemies in ShadowGun for the BlackBerry PlayBook?” 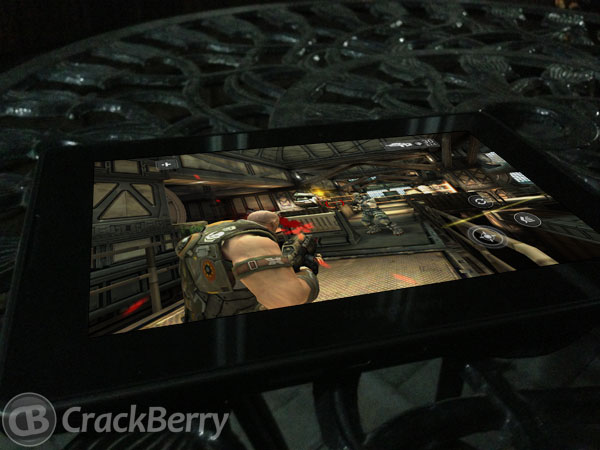 Recently, Madfinger and Union delivered one of their hot titles to the BlackBerry PlayBook, ShadowGun. I’m going to go out on a limb and say that I think ShadowGun is the best graphical game currently on the BlackBerry PlayBook. Sorry Dead Space, but you had your fun. Continue reading to get the low down on all that is ShadowGun, then you can decide what game claims the title of best graphics on the PlayBook.

FROM THE MIND OF A MADMAN!

So picture this, the year is 2350 and you are the most infamous bounty hunter in your galaxy. You are the only one that can take out the evil Dr. Simon’s. You play the game through various levels of complexity. At the end of each level, you are positioned head to head with a level boss.  You’ll have to use your skills and intuition to beat the bosses as they get harder and harder as the levels progress. In the game, you will have access to a wide arsenal of weapons that are truly out of this world. Just don’t be fooled by the smaller enemies, sometimes your worst enemy is the ones you can barley see.

If you wanted a game that would show off the true power of the BlackBerry PlayBook, then this is the game for just that. ShadowGun has reactive and unscripted AI, meaning the enemies are never the same and will continue to challenge your gaming skills.  You’ll also notice that the developers have created the game character’s A.I. to utilize their surrounding environment. The enemies use their surroundings to take cover and get the better angle, all in order to get the best shot on – well you. The developers have also used high textured images and environments, adding to the game’s addictiveness.

I feel that with each major game release for the PlayBook, the developers keep stepping it up in the graphics department, and ShadowGun doesn’t stray from this.  I’m going to go out on a limb and say that ShadowGun currently holds the title for the game with the best graphics on the BlackBerry PlayBook. I’d like to see a game that competes with it, and I’ve played them all. So, if you’re looking for cutting edge visuals, check out ShadowGun.

One thing you’ll notice, once you’ve ventured into the in-game settings page, is they are quite sparse.  Within the settings page, you will be able to change the on screen controls from free move (this is wherever you place you fingers is where a control will be), and static move pad. The static move is an option that will keep the left toggle in a static location. I’ve found the free move pad the best, as you don’t need to worry about where you place your thumbs. From the settings page, you can also lock the vertical look, and give yourself the option to change the aiming to the left hand vs the right. In addition to game control settings, you have the option to adjust the music volume, and turn on or off the subtitles.

While there may be only two control styles in the game’s settings page, you will definitely enjoy what ShadowGun brings to the BlackBerry PlayBook. With HD quality graphics, an enemy A.I. system that will keep you guessing, and stunning voice acting that will pull you into the game’s story, ShadowGun is worth the download. You can pick up ShadowGun from BlackBerry App World for free until October 31st, 2012.