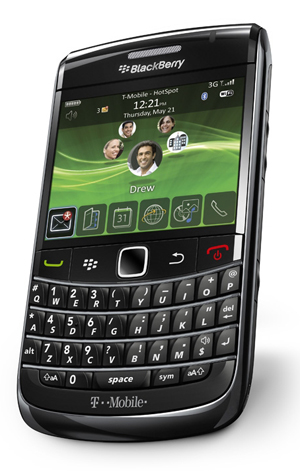 Our pal Al Sacco scored a bank error in his favor this morning when T-Mobile sent him a marketing image of the upcoming BlackBerry Bold 9700 which was not accompanied by any embargo terms. I brought you live images of the T-Mobile branded Bold 9700 previously, but this marketing shot sure looks sweet. T-Mobile also sent along the following blurb, which still makes use of the "onyx" codename:

"The BlackBerry 'Onyx' sports a premium experience and design with a high-gloss black finish and leather grain detail on the back. Boasting features such as high-speed 3G Web browsing, Wi-Fi calling, visual voicemail and support for corporate and personal e-mail options, the 'Onyx' will satisfy all your on-the-go needs. Also the phone comes preloaded with mobile applications from BlackBerry App World, including Amazon MP3 store for quick and easy music downloads and TeleNav GPS Navigator for turn-by-turn directions."

Regarding release dates, Al says T-Mobile says it'll be here before the end of 2009, and with the later-heard embargoed date being early November that sounds more than reasonable. As far the use of the word "onyx" goes, it could be that their sticking with that for now until they officially decide on the model number for the device. It should be a Bold 97xx (the word Bold is on the backside of the device), but rumor has it that the T-Mobile version of the Bold is actually a bit different spec'd than the version AT&T and other GSM carriers around the world will ultimately get. While the AT&T/other version makes use of the Bold 9000's processor and battery, the T-Mobile version is slightly different, featuring a different processor and making use of the battery found in the Curve 8900/Storm/Tour. Why? So the T-Mobile version will be the same worldwide, working with 3G both on T-Mo USA and T-Mo in Europe, while the everybody else version of the new Bold (AT&T, Rogers, Vodafone, etc.) will not need T-Mo USA's HSPA frequencies. Maybe T-Mo's will be the Bold 9700t while elsewhere it'll just be the 9700. Or maybe their just waiting until RIM actually announces the exsistence of the device and are sticking to the onyx codename until that happens. As always, all will be revealed in time. Sure looks pretty though.