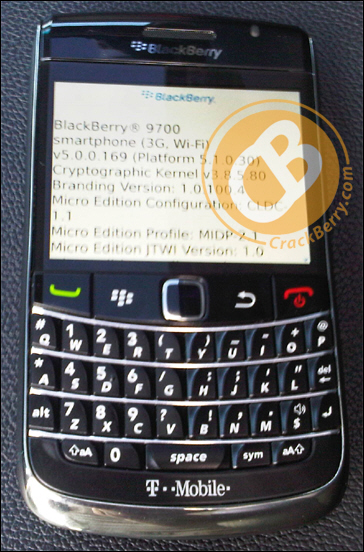 Seriously, I need to travel more often. It wasn't so long ago that the 'javelin' (Curve 8900) was still unavailable that I spotted three in the same airport while flying to NYC. This time around while traveling home from vacation I was able to spot and get a few precious moments of hands-on time with the device above (single capture taken on my Verizon Tour) ... of a T-Mobile BlackBerry Bold 9700.

Wow, what a device. I've already reviewed the BlackBerry "onyx" (9020 device model at the time, now the BlackBerry Bold 9700) and basically concluded it was the ultimate "traditional" BlackBerry. Compared to the unit in that initial review, this one has a trackpad (vs. trackball), more of a silver chrome vs. charcoal (could be that AT&T will get the charcoal version) and the leather back on the battery door that we've previously featured on the blogs. It also felt different in the hand compared to my early model - this unit felt very sturdy (production ready?!). Couple that feeling with the T-Mobile branding and let's hope this baby is due sooner than later.

So for all the T-Mobile customers out there who didn't rush out to buy the Curve 8520, how do you feel about the BlackBerry Bold 9700?? Finally visual proof of a 3G BlackBerry on T-Mobile!! Big thanks to the BlackBerry Gods for being so good!