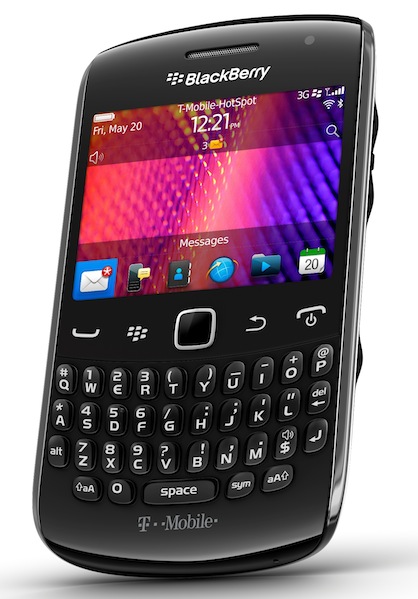 We knew this was coming as we saw a few bits and pieces of T-Mobile promo material for the BlackBerry Curve 9360 in the last few days, and today the Curve 9360 has officially been announced. The latest addition to the T-Mobile lineup will be available in both Black and an exclusive Merlot color starting September 28th and October 12th respectively (business customers can order starting today). The Curve 9360 is sporting a full QWERTY keyboard, 5MP, BlackBerry 7 and more. Keep reading for the full press release.

Encased in a sleek package, including a wide 2.4-inch screen, full QWERTY keypad and navigation track-pad, the BlackBerry Curve 9360 is ideal for efficient mobile communications. The new smartphone is also equipped with essential smartphone features such a 5-megapixel camera with flash, video recorder and Wi-Fi connectivity for voice and data for a premium smartphone experience. The next generation BlackBerry Curve smartphone delivers the world's best mobile communications and social experiences with the latest release of BBMTM (BlackBerry® Messenger) pre-loaded and now extends the real time BBM experience to a range of other apps, such as Foursquare, allowing users to easily interact with each other from within the ‘BBM connected' app.