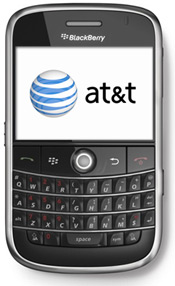 'So who's going to be the first carrier to offer the BlackBerry Bold!?' I can hear you all saying...

Word is spreading that AT&T will be the first carrier with the Bold on offer. It has also been noted that AT&T also has exclusivity on international 3G usage. Sprint and Verizon's EV-DO network isn't as universal as AT&T's HSDPA. I'd still look for the other carriers to launch their own version of the Bold in the near future. Lets give this some time to sort itself out. Still early days.

One thing is for certain...I'm jonesing for pricing details, aren't you? I'm not even going to hazard a guess, even though I'm sure I could be right on the money with this one. No pricing details have been confirmed on the unit as of yet... But with Kevin live at WES, I'm sure he's hunting down more information as I speak.

Stay tuned for more coverage on the BlackBerry Bold!