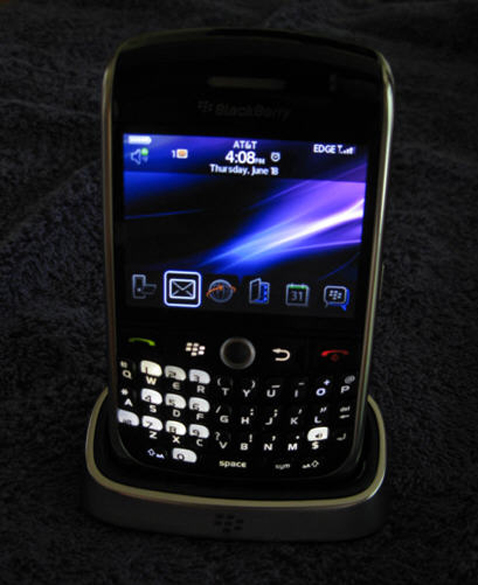 The BlackBerry Curve 8300 was and still is one of RIM's most successful smartphone devices. Recognizing that, RIM released a new version of the popular curve. The new device is called the BlackBerry Curve 8900. Already available on T-Mobile for a while now, this next generation Curve recently landed on AT&T. The 8900 has an all new body, but has a similar layout and feel that any 8300 Curve user will find familiar.

After receiving the phone in the mail and unboxing it, a couple things about the phone really stood out to me. First of all, the overall design of the phone was fantastic. The 8900 improves upon the 8300's fantastic case design, which makes it a natural fit to your hand. Of course, when receiving a new BlackBerry one must obviously test out the keyboard. The 8900's keyboard is very easy to type on and took no time at all to get used to. The new BlackBerry 4.6 Operating System looks fantastic on the 460x360 LCD Display. The Curve 8900 is RIM's thinnest BlackBerry to date, but it is not so thin that it hampers use, which I have found to be the case with some other smart phones. I would call the 8900 the perfect amount of thick and thin. It is thin enough that it isn't like carrying a brick, but thick enough to make it substantial in your hand, which is a big plus in my opinion.

On the right side of the device from top to bottom are a stand 3.5mm headphone jack which allows you to utilize industry standard headphones. Below the headphone jack is an easy to use volume rocker, below the volume rocker is one of the 8900's two convenience keys that can be programmed to launch any application on the BlackBerry. Finally, you have charging port. With the 8900, RIM has changed from using the standard Mini USB charging port. This is one of my complaints. All the BlackBerrys I have used have shared a common charging port, I'm not sure why RIM changed this on the new Curve. The Pearl Flip, Storm and it looks like all future devices (Tour, etc.) have now switched to Micro USB, which will be fine moving ahead but renders my old accessories useless. On the left side of the device is the second programmable convenience key.

On the front of the device are the standard keys. Left to right, you have a send key, the BlackBerry key which opens the menus, a return or back key, and finally a end key. In the middle of the 4 buttons are the trackball. With the 8900, RIM has used a new black trackball. The new trackball is not backlit, but is a nice improvement in my opinion because it does not show dirt like the old white illuminated trackballs.

The new BlackBerry 4.6 operating system on the Curve 8900 is excellent. In the period I have spent reviewing the device I have had no problems with the device. The new OS is very similar to older BlackBerry operating systems and should take no time to get used to if you have used a BlackBerry before. If you haven't used a BlackBerry and this is your first one, I think you will find that the BlackBerry is very intuitive and easy to use. OS 4.6 has a new sleeker appearance that makes the Curve a joy to use. With the new OS, the BlackBerry has an excellent battery life, RIM quotes the battery life as 5.5 hours talk time and up to 15 days standby time. I charge my phone every night and have not tested the battery, but through normal daily use of texting, mobile browsing, phone calls, etc. the BlackBerry has not gone dead or gotten low. The 8900, like all new BlackBerry device models, has access to the BlackBerry App World allowing you to download and install applications over the air (OTA) without the need to sync to a computer. Of course, you can also check out the CrackBerry App Store as well.

With this being my first exposure to 4.6, I was definitely happy. And it seems further improvements are just around the corner with OS 5.0, which the Curve 8900 from AT&T will benefit from once the update is released later this summer.

If I had to pick one smartphone to use it would definitely be the BlackBerry Curve 8900. I have used plenty of other phones and the new Curve is a joy to use. It has all the features available for business users or personal users. I can definitely see the 8900 being on of RIM's best sellers. The BlackBerry Curve 8900 is currently available on AT&T Wireless and T-Mobile in the U.S. for around $150 with a new 2 year contract or contract renewal, a very reasonable price for all the features included.