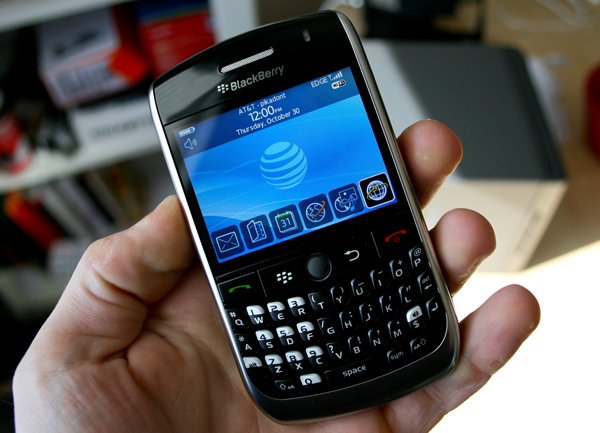 We knew it was coming for a long time now. But today AT&T gave us the official word through the news wire that a early summer release is now on. I guess that puts an end to all the statements of AT&T only wanting 3G devices on their network. AT&T's version will be just like any other such as Rogers and T-Mobile, no spec changes, and you can read the full press release after the jump for more details.

DALLAS, May 4 /PRNewswire-FirstCall/ — AT&T* today announced the early summer availability of the BlackBerry(R) Curve(TM) 8900 smartphone. AT&T consumer, small business and enterprise customers will enjoy new features and enhanced performance, including both Wi-Fi(R) and GPS, a fast next generation processor, rich multimedia capabilities and ample memory for applications offered from AT&T. With the BlackBerry Curve 8900 from AT&T, users can get a faster, richer experience surfing the Internet and accessing their social networking or line-of-business applications via AT&T’s wireless and Wi-Fi networks.

Consumers and mobile professionals can easily share photos or record video using the new 3.2 megapixel camera which features auto focus and image stabilization, and the microSD/SDHC expandable memory card slot supports up to 16GB(1) per card, giving users plenty of storage to carry and capture more of their music, pictures and video wherever they go. AT&T will offer the sleek new smartphone in an attractive silver and black finish.

Users who select an unlimited data plan with the BlackBerry Curve 8900 will also receive free AT&T Wi-Fi access at nearly 20,000 hotspots in the U.S. - including retail stores, restaurants and airports from coast-to-coast(2), an unmatched value add for mobile professionals who spend as much time out of the office as in it. The smartphone can also easily connect to a home or office Wi-Fi network.

“This new smartphone has a stunning design that builds upon the success of the BlackBerry Curve with more features for applications, all in a high-quality handset,” said Chris Hill, vice president, AT&T Business Solutions. “Add to it free access to the nation’s largest Wi-Fi network and the BlackBerry Curve 8900 from AT&T delivers unmatched value and performance for personal and business use.”

Like all AT&T smartphones, the BlackBerry Curve 8900 is a world phone, allowing customers to access data in more than 170 countries and make calls in more than 200. The smartphone supports quad-band EDGE (850/900/1700/ 1800Mhz) and Wi-Fi 802.11 b and g. The BlackBerry Curve 8900 also comes with a removable/rechargeable battery that provides a talk time of 5.5 hours and approximately 15 days of standby time.

The on-board GPS supports location-based applications and services, including AT&T Navigator, which provides audible turn-by-turn directions and will be available free for 30 days(3). AT&T Navigator also monitors traffic and alerts you when there is slowdown or incident, and you can get a new route around congestion with just one click. Customers can also use AT&T Navigator Global Edition for access to maps and directions in 21 countries and in five languages. Learn more at www.att.com/navigator.

Customers can also quickly access business listings, phone numbers and more from the included Yellowpages.com application and listen to their music using the included media player or XM Radio Mobile.(4)

The BlackBerry Curve 8900 smartphone will be available in AT&T stores and online at www.wireless.att.com in the early summer. For the complete array of AT&T offerings, visit www.att.com.(5)

(1) MicroSD/SDHC memory cards are available today in configurations of up to 16GB and the BlackBerry Curve 8900 is expected to support upcoming 32GB microSD/SDHC cards.

(3) Users must cancel free trial of AT&T Navigator within 30 days or be automatically subscribed at a cost of $9.99 per month for unlimited routes. You can cancel from the “My Accounts” portal on your handset or call AT&T customer care. Standard data charges apply, depending on your plan.

(4) XM Radio Mobile is available for $8.99 per month. Data charges also apply and AT&T recommends and unlimited data plan. Downloading and/or using this product will consume a large amount of data,

(5) Coverage not available in all areas. Other terms and conditions apply.