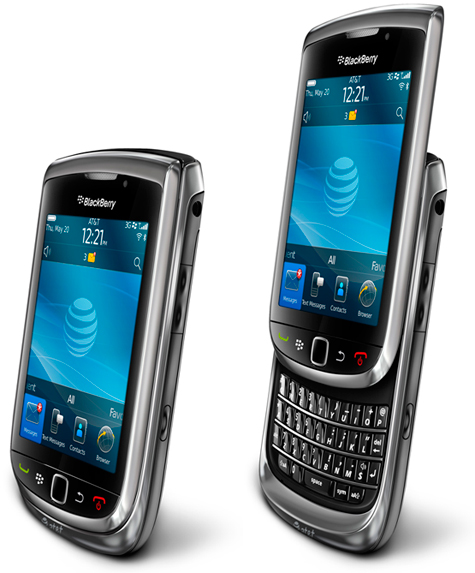 Joining forces to offer the first smartphone to feature the highly anticipated BlackBerry® 6 exclusively on the nation's fastest mobile broadband network, AT&T* (NYSE:T) and Research In Motion (RIM) (NASDAQ:RIMM)(TSX:RIM) today introduced the new BlackBerry® Torch™ 9800 smartphone. Adept for socially connected consumers and packed with the tools business customers love, the new handset is the world's first smartphone to combine a BlackBerry® keyboard with a full touch screen experience. Whether users choose to type out messages on the capacitive touch screen or easy-to-use BlackBerry keyboard, browse the Internet using pinch to zoom or fluidly navigate with the optical trackpad, the BlackBerry Torch allows them to communicate any way they want.

"We were the first to launch the BlackBerry solution in 1999 and have a rich history of innovation and collaboration with Research In Motion," said Ralph de la Vega, president and chief executive officer, AT&T Mobility and Consumer Markets. "The two companies that brought the first BlackBerry smartphones to market have teamed up again with the new BlackBerry Torch, creating a true generational shift in hardware and operating system for this enormously popular service."

The BlackBerry Torch is the first BlackBerry smartphone to launch with BlackBerry 6, a new operating system that retains the familiar and trusted features that distinguish the BlackBerry brand while delivering a fresh, approachable and engaging experience that's powerful and easy to use.

BlackBerry 6 features a redesigned interface that seamlessly works with the touch screen and trackpad, includes expanded messaging capabilities with intuitive features to simplify the management of social networking and RSS feeds (Social Feeds), and provides integrated access to the BlackBerry® Messenger (BBM™), Facebook®, Twitter™, MySpace™ and various instant messaging applications available on the BlackBerry Torch smartphone. Its enhanced multimedia experience rivals the best in the industry and includes a dedicated YouTube app and Podcasts app.

BlackBerry 6 also integrates a new and rich WebKit-based browser on BlackBerry Torch that renders HTML web pages (as well as HTML email) quickly and beautifully for a great browsing experience. It features tabs for accessing multiple sites simultaneously, pinch to zoom for easy navigation and an auto-wrap text zoom feature that can intelligently wrap text in a column while maintaining the placement of a page's key elements (simply double-tap on the BlackBerry Torch).

Universal search, always accessible from the Home Screen, allows users to search through email, messages, contacts, music, videos and more on the smartphone, as well as extend search to the Internet or to discover applications on BlackBerry App World™.

Messaging has always been a core element of the BlackBerry smartphone experience and the BlackBerry Torch smartphone expands on RIM's popular messaging solutions with the support of AT&T's advanced messaging features for SMS and MMS. RIM's new Text Messages application is especially exciting for users who communicate most via SMS and MMS, providing support for AT&T's next-generation messaging experience, which includes group messaging with "reply all" functionality for up to 10 contacts. And for the first time, AT&T's platform includes a new Locations feature.

Locations lets users easily search for points of interest, businesses, and even the user's own location, and insert this information directly into a message, all without leaving the messaging application. Using group messaging and locations together, users can arrange to meet a group of friends easily by sending one message to all of them, discussing together where to meet and then sending a map – all in one threaded conversation. AT&T designed the service based on research that revealed customers want features that help facilitate social planning, improved message organization and location sharing.

Apps At Your Fingertips

After powering up the BlackBerry Torch smartphone for the first time, users will notice a set of pre-loaded icons which allow them to download and immediately begin using a variety of rich entertainment and social networking applications to access Bloomberg, ESPN, The Weather Channel and Slacker Radio content in addition to Facebook, MySpace, Twitter and more. Also available is AT&T's Web Video Search, a unique new app that searches video content from over 70 major Internet video websites.

In addition to searching the Internet for video, the BlackBerry Torch smartphone also features more multimedia apps that let users download TV shows and watch live TV, as well as create video content and upload it to YouTube. The new Podcasts application makes it easy for users to find and manage audio and video podcasts.

Another application that puts a key function of a phone at your fingertips is Visual Voicemail, which benefits customers by allowing them to select the voicemails they want to hear first.

The BlackBerry Torch 9800 is also the first BlackBerry smartphone to include BlackBerry App World™ pre-installed, supporting carrier billing through AT&T, making it easier for customers to discover and purchase applications.

The BlackBerry Torch 9800 smartphone will be available only for AT&T customers on August 12 in AT&T company owned retail stores and online at www.att.com/blackberrytorch, as well as Best Buy, Wal-Mart and RadioShack stores.

The BlackBerry Torch 9800 will be available for $199.99 with 2-year service agreement on a qualifying rate plan and smartphone data plan required. New smartphone customers may choose from two AT&T monthly data plan options, $15 for 200 MB of wireless data or $25 for 2 GB. Enterprise and small business customers should contact their account representative for pricing details.

AT&T imposes: a Regulatory Cost Recovery Charge of up to $1.25 to help defray costs incurred in complying with obligations and charges imposed by State and Federal telecom regulations; State and Federal Universal Service charges; and surcharges for government assessments on AT&T. These fees are not taxes or government-required charges.

**Certain music files may not be supported, including files that contain digital rights management technologies. Photo and video syncing is currently only available for Windows-based PCs.

Limited-time offer. Other conditions & restrictions apply. See contract & rate plan brochure for details. Subscriber must live & have a mailing addr. within AT&T's owned wireless network coverage area. Up to $36 activ. fee applies. Equipment price & avail may vary by mrk & may not be available from independent retailers. Early Termination Fee: None if cancelled in the first 30 days, but up to $35 restocking fee may apply to equipment returns; thereafter up to $325. Some agents impose add'l fees. Unlimited voice services: Unltd voice svcs are provided primarily for live dialog between two individuals. No additional discounts are available with unlimited plan. Smartphone Data Plan Requirement: Smartphones require a DataPlus (200MB) or DataPro (2GB) plan. If you exceed your initial data allowance, you will automatically be charged an additional $10 for each additional 1GB provided on DataPro or an additional $15 for each additional 200MB provided on DataPlus. All data allowances, including overages, must be used in the billing period in which the allowance is provided or they will be forfeited. An Enterprise Data Plan is required for corporate email, company intranet sites and business applications. For more details on Data Plans, go to att.com/dataplans. Offnet Usage: If your mins of use (including unltd svcs) on other carrier's networks ("offnet usage") during any two consecutive months or your data use during any month exceeds your offnet usage allowance, AT&T may at its option terminate your svc, deny your contd use of other carriers' coverage, or change your plan to one imposing usage charges for offnet usage. Your offnet usage allowance is equal to the lesser of 750 mins or 40% of the Anytime mins incl'd with your plan (data offnet usage allowance is the lesser of 24 MB or 20% of the KB incl'd with your plan). Sales tax calculated based on price of unactivated equipment. AT&T Wi-Fi Hot Spots- Based on non-municipal company owned and operated hotspots. A Wi-Fi enabled device required. Other restrictions apply. See www.attwifi.com for additional services, restrictions and locations. Visual Voicemail - Data plan required for AT&T Visual Voicemail. Data used in replying to and forwarding voicemail messages via SMS, MMS or email is counted against your data plan. Applicable data charges apply if data plan limits have been exceeded. International data charges apply to receiving, replying to and forwarding voicemail messages while roaming internationally.