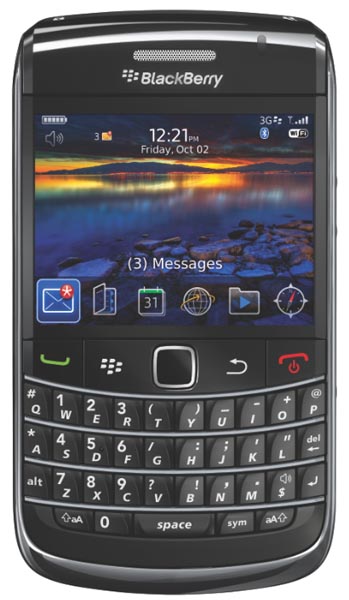 After testing out numerous different Blackberry devices over the past few years, I always find myself with "one more thing" i wish the device would have included. With the Tour it was Wi-Fi, with the CDMA Curve 2 it was a higher resolution camera, and with the 8900 or Pearl Flip it was 3G. Finally, I can say that RIM has "checked all the boxes" with the introduction of the Blackberry Bold 9700, AKA the Bold 2. Add in the change from the trackball to an optical trackpad, and the Bold 9700 has been the Blackberry I've been waiting for. The Bold 9700 used in this review was provided by RIM, and has service with AT&T. It is available for $99 with a 2 year contract after mail in rebate.

On my way back from the SPE Round Robin meet-up, I found myself in both the Orlando and Charleston airports. I was at the Orlando airport for about 2 hours before my flight, and really wanted to dig into the 9700 to get to know it's capabilities. The phone however, didn't want to cooperate. It wasn't so much that the phone was being difficult, rather, the AT&T network. On both my iPhone and the 9700, the service was horrendous. In an airport, where you know there are going to be a lot of people trying to use cellular services, the network fell on it's face. I did have a 3G signal in some parts of the airport, but most places it seemed to revert back to EDGE. Speeds on either network were slow, and web browsing was painful. I was disappointed to say the least.

Once I made it to the Charleston airport, my experience was more on par with what I expect from AT&T. Service was good, and I could hold a 3G connection without an issue. This was good, as it was a Sunday afternoon, and I wanted to catch a few minutes of football before hopping on the final leg of my journey. I installed the Slingplayer application on the device and was able to hold a great connection back to my Slingbox over 3G without a problem. This has always been one of my favorite things to do on a device, and I like platforms that don't restrict the use of software to certain connections.

Back on the ground in Phoenix, the phone/network performed as expected, with the exception of voice quality. One person said my voice sounded higher and less bassy then on other phones. Another said that I sounded "choppy". On my end, calls sounded just fine, and were quite clear and loud. The 9700 did hold calls well, and I did not have any dropped calls. It seems that the AT&T network is just as finicky as ever when it comes to location. There are many cities around the country that have great AT&T service, and there are few user complaints. I have found that while Phoenix is spread out enough to accommodate for the millions of residents, the 3G coverage isn't as prominent as rival Verizon. You can find yourself in the outskirts of the suburbs, and your service will drop down to EDGE, or worse, fluctuate between 3G and EDGE, sucking down battery quicker than you'd expect. Speaking of the battery, the 9700 battery performs quite well for everything that it does. As I expect from Blackberry, I can get through 2 days of use without having to charge, and not sacrifice any functionality along the way.

The Bold 9700 hardware looks like a blend of the Tour 9630's styling with back of the original Bold.

For comparison purposes, I took 3 different Blackberries together to show the differences. From left to right, the AT&T Pearl, Verizon Curve, and Bold 9700. This is also the order from top to bottom in photos with this configuration.

Notice the "frets" in between the rows of keys. This not only is a nice touch for styling, but really helps space out the rows.

Top side. Lock and mute buttons.

Back side. 3.2MP camera with LED flash. Battery cover accented by leather.

A little about the keyboard. Since the 7200 series, i really felt that RIM had a leg up on any competition out there for qwerty keyboards. Each iteration (8800, 8300, 9000, 8900, and 9600) has had its pros and cons, but were for the most part very good. The original Bold was considered by many to have the "Cadillac" of qwerty keyboards with its wide design and soft clicks. However it was often criticized for being too big. RIM took this into consideration when it designed the 9700, which I think is the most comfortable qwerty keyboard on the market today. The raised ridges of the keys flow smoothly from one to another, and the soft clicks of the keys make it very comfortable to use for prolonged periods of time. The lack of the loud "click" when each key is pressed (like on the 8300 series) also makes the keyboard feel solid.

New in 2009 to the Blackberry is the optical keypad for navigation. Out is the issue-prone trackball of the Pearl and Curve series, and in is the new touch sensitive trackpad. In real world use, i found it to be vastly superior to the trackball of the Curve that I use each day. Not only are there no moving parts to fail, but it feels more like navigating on a touch screen device, something that is becoming an increasingly popular feature in smartphones. The only real issue with this type of navigation, is the same as any touch screen device, moisture. If you have a little water or sweat on your hand, you will find the trackpad a bit "sticky". A quick wipe of your hand will usually fix the issue, and it really isn't a problem.

The 9700 comes with the latest version 5.0 of the Blackberry OS. The version 5.0.0.296 has good speed, and there is little to no sluggishness as you go fly though applications.

The home screen layout is similar to that of the Curve 8900 or Tour, with icons that I can finally appreciate

Here is an example of Google Voice for Blackberry. This is one of my top Apps for the phone, allowing tight integration for calling and SMS'ing your Google Contacts. This is a great app for those that change devices frequently, or just want to have a unified number for every device.

Along with the standard PIM applications you expect on every smartphone, the 9700 comes Word To Go, Sheet To Go and Slideshow To Go from Documents To Go. These applications allow you to open and view your Word, Excel and Powerpoint files.

Games are always a fun way to pass the time with your device. The 9700 comes with Tetris, Scrabble, Pacman, BrickBreaker, Hold'Em and others.

The Downloads folder is the default where all downloaded apps land. This makes it easy for quick launching of any of your favorites.

The Media Folder is typical of all Blackberries, with Music, Video, Ringtones, Pictures and Voice Notes. Music sounded great, and the videos played smoothly on the screen.

Mobile Video gives you access to short clips of the latest in news, sports and entertainment.

Here is an example of the quality using the Mobile Video.

AT&T Music is a folder with links to shop for or stream music from a variety of sources.

AT&T Maps is a great built-in program to take advantage of the GPS capabilities of the phone. It uses the 3G connection of the phone to pull down data real time of your area.

The new Blackberry Messenger 5 is on the 9700 as well.

One of the advantages the iPhone has had over the Blackberry is the success of the iTunes Application store. With over 100,000 to choose from, it has given developers the ability to get their software in front of the millions of users in one central location. RIM's App World brings the Blackberry into the world of easy to download apps directly to the phone. By heading to blackberry.com/appworld users can now download the application to their device that allows them to load applications easily and quickly to the device. While still not as comprehensive as the iPhone, App World is growing quickly, and many developers are finding success selling here.

A few notable applications that I installed to test were Slacker Radio, SlingPlayer and CaptureIT. I had to download the Bold version of SlingPlayer, but once installed, it performed very well, especially over Wi-Fi.

One other interesting program that Kevin  turned me on to was I Love Blackberry. This app tracks your usage of the device, and shows you how much of an addict you are. Lots of fun, if not a little scary.

The 3.2MP camera on the 9700 has great quality, and takes similar photos to those of the 8900 or Tour. The auto focus definitely assists in the resolution, and in both indoor and outdoor conditions, it is arguably a point and shoot replacement. Here are a few photos from the 9700 indoors, with very poor light. As you can see, the flash does a good job in assisting to create decent shots.

Here is a shot taken outdoors in partly cloudy conditions, with photos taken with the Curve 8300 and iPhone 3GS for comparison purposes.
9700

Overall
The Blackberry Bold 9700 on AT&T is arguably the best Blackberry currently available on its network here in the US. With great specifications and nice look hardware, RIM has placed themselves in a nice position in the smartphone game that not only will appease the toughest Blackberry addict, but also turn some heads along the way.

This review was completed by Mickey Papillon, Creator and Host of the podcast The Cell Phone Junkie. For information about the show, please visit www.thecellphonejunkie.com