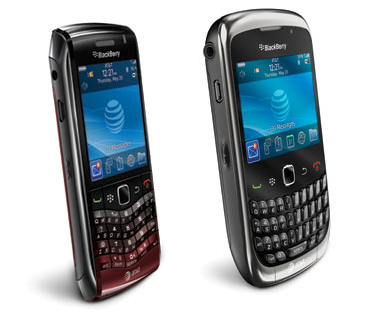 No matter how you stay in touch – whether through voice calls or social networking – the new BlackBerry smartphones connect you in style.  Customers can stay connected with friends and family on the go through a broad variety of apps like Facebook® and BBM™ (BlackBerry® Messenger).  In addition to pre-loaded social networking apps, both the BlackBerry Curve 3G and BlackBerry Pearl 3G now include BlackBerry App World™, with purchases automatically included on AT&T customers’ bill.

BlackBerry Curve 3GThe BlackBerry Curve 3G, the first 3G BlackBerry Curve from AT&T, features the iconic BlackBerry design with a full QWERTY keyboard and optical trackpad.  The new smartphone features built-in GPS, as well as dedicated media keys, so music lovers can easily access their tunes while on the go. It also features a camera that can record video and a microSD/SDHC slot that supports up to 32 GB memory cards for media storage. Support for 3G networks makes browsing faster, streaming music smoother, and gives users the ability to talk on the phone while they browse the web, instant message with BBM™ or share their location with friends on popular social networking sites. The BlackBerry Curve offers an exceptional BlackBerry experience at an affordable price.

BlackBerry Curve 3GThe BlackBerry Pearl 3G smartphone is the smallest BlackBerry® smartphone yet and is as powerful as it is compact. Measuring less than two inches wide and weighing only 3.3 ounces, it still manages to pack in support for high-speed 3G networks, Wi-Fi (b/g/n) and GPS along with a high resolution display.  It also features an optical trackpad for smooth navigation, dedicated volume and media keys for added convenience, a 3.2 MP camera with flash for quality pictures on the go, and support for up to 32 GB of personal content. The BlackBerry Pearl, available in a red gradient, is ideal for customers who prefer a compact device, but still want a smartphone that delivers a full BlackBerry experience.


“AT&T continues to expand our offering of BlackBerry smartphones, including the recently launched BlackBerry Torch, to suit the various needs of our customers,” said Michael Woodward, vice president, Mobile Phone Portfolio, AT&T Mobility and Consumer Markets. “As the first U.S. carrier to offer BlackBerry service, we are pleased to add the BlackBerry Pearl 3G and BlackBerry Curve 3G to our portfolio, which deliver style without compromising features or functionality.”

For the complete array of AT&T offerings, visit www.att.com.