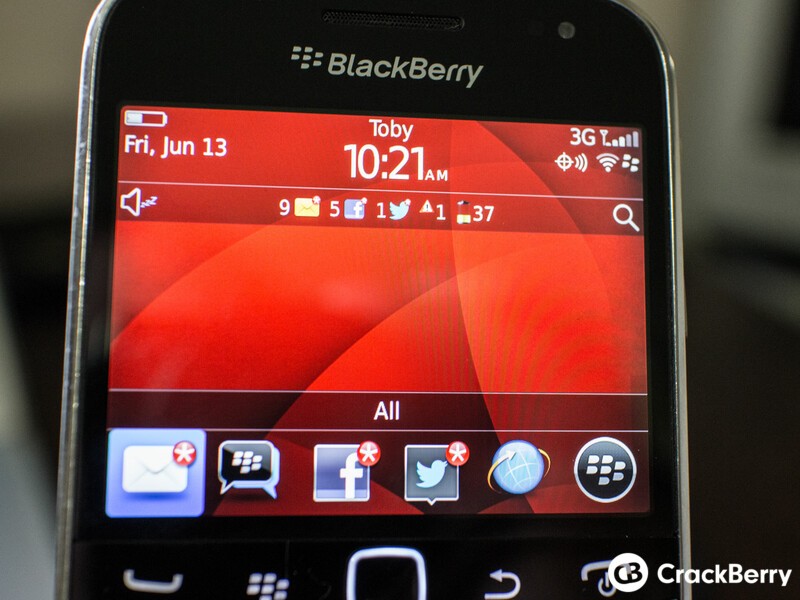 As I'm sure most of you already know, last weekend Kevin, James and I headed to Montreal to check out the Canadian Grand Prix — and we had an amazing time. I drove up from New Jersey with a friend of mine, but it wasn't until the day before that it dawned on me that I wouldn't have any phone service once hitting the Canadian border. Since I rarely leave the country I don't carry an international plan on my phone, and on AT&T (like most carriers) you pay quite a bit for not a whole lot in return. So I decided to forego data service on my main SIM and instead brought along my trusty BlackBerry Bold 9930. Why you ask? The short version is that is has Verizon service which I don't pay for, hence free roaming in Canada.

The morning before we left I turned on my 9930 for the first time in months. It took a while to start up, but I have to say I was pretty excited to rock out BBOS for a bit. After it started I updated the few apps that needed it, made sure my accounts were registered properly and swapped over my BBM (which is immensely easier than it used to be). I grabbed a spare battery and charger and was on my way North.

For a few hours in the car I played around with my 9930, mainly removing apps I didn't need and tweaking various settings. I wasn't planning to go hardcore with my use on this over the weekend, but I wanted just enough to get by. That meant email, BBM, Twitter, a bit of Facebook and maybe some web browsing. I removed all of the "extra" apps that I had installed from my last use, wanting to free up what space I could to try and speed this little guy up.

The first few emails came in and I started to get really excited. I opened them and started replying on that awesome 9930 keyboard. I love typing on my Q10, but there's just something about the 9900/9930 keyboard that is still so amazing. I pounded out emails and went about my business. I'll admit that I did get hung up a few times navigating menus, but that's to be expected. I actually tried swiping up from the bottom bezel more than a few times to try and leave apps too. Oops.

Yes, things were a bit slow. It took some time to open emails and BBM would lag a bit when I opened it, but overall it wasn't a terrible experience. Still, there were some things that I totally miss on BBOS and some that I can definitely do without.

I still love the Bold 9930 keyboard. Typing on it is awesome. It feels good, has a good "click" to it and is just badass. Of course the trackpad and menu buttons are great too. Can I do without them? Sure, but I loved being able to use physical buttons, or using the trackpad to scroll rather than using the actual screen. These make me excited for the BlackBerry Classic that's for sure.

I loved being able to use physical buttons, or using the trackpad to scroll

I also love the notification banner — being able to see all the little icons for my notifications without having to swipe or gesture anywhere. Clicking or tapping on the banner drops now the notifications, and I can jump to whichever I want just like that. A small part of that is the notification sounds on BBOS, which I'll always love. Those don't really count though since you can easily get them on BB10 as well.

BBM is a combo of love and hate for me on the 9930. I love that it still works as good as ever, and while some of the features are great, others aren't so much (see below on those). I love that there are separate notifications for BBM Channels and everything is customizable — from new messages to groups to channels. I love that I could simply switch over my BBID to a different device without having to tell anyone and everything just worked. When I got home, I switched back and that was that. Still my favorite messaging service out there.

Also, I still love Twitter for BlackBerry. It's super simple, has the features I want and isn't over the top. I know a lot of you think it sucks, but I still love it. Sorry I can't say the same for Facebook (it's pretty bad).

Of course BBOS is outdated — it's slow and ugly and just isn't current. It still works and does a good job, but BB10 is a vast improvement. I do still like the ease of the OS — everything is where I needed it and worked when I wanted it to. On the flip side, there are things I just wouldn't be able to live with at this point if I were to use BBOS full time.

It still works and does a good job, but BB10 is a vast improvement

The calendar is a big one for me. With no support for multiple Google Calendars I'm totally lost. At this point I have 6 or 7 calendars that I need to keep track of, and BBOS just isn't up to the task. Same goes for email & contacts. Two-way sync with Gmail still sucks, contacts are a mess (especially with more than one account) and everything is just fragmented. For this scenario everything was there and I dealt with it okay, but for day-to-day there's no way I could do it.

Of course the lag and overall speed (or lack thereof) within the OS gets to you after a while too, but that's why BB10 came along, right?

So what's my point? My point is that there are still some awesome things about BBOS and legacy BB devices — I love how some things within the OS work, others not so much. I love some of the older hardware — namely the 9930 keyboard and overall form factor. I like that I was able to get by enough that I could use the 9930 for a whole weekend and not want to shoot myself, but I have to say I was very excited to cross the border and put my SIM back in my Q10. It was like using BB10 for the first time all over again. It's safe to say that I won't be dropping back to BBOS anytime soon (or at all, ever really). It was great for what it was, but BB10 is where it's at now.

Have you used BBOS after using BB10? How did it feel? What did you love/hate? Sound off in the comments!