Swamp Attack is yet another great game that you won't find in BlackBerry World I'm afraid. At the time of writing this I found it in the Snap store which currently is a bit more tricky to load onto your BlackBerry 10 device than the Amazon Appstore, but once you know how you'll have a ton of apps and games at your fingertips. Full instructions will be in the link at the base of the post.

With Swamp Attack you play the role of a gentleman (and I use that term loosely) who is defending his cottage against the onslaught of creatures that come from within the swamp. Clearly having a house within a swamp is a bad move!

Initially you'll be armed with just a shotgun and you just tap on the display where you wish to aim. There are some shotgun cartridges shown in the top middle of the screen and these turn from red to transparent as you use them. Once your gun is empty it just takes a few seconds to reload.

As you progress through the levels, of which there are 78 plus quick missions, you'll also pick up various bonus weapons - such as dynamite and molotov cocktails. Use these only when you need to though as their supply is very limited.

Within each level and when one is completed you will be rewarded with coins. These can be spent in the shop to upgrade your guns, defense and other weapons. There will also be some in-app purchases here if you run out of patience - you certainly don't need to use them though. While you are in the shop I particularly love the way that cockroaches run over the display - yuk! 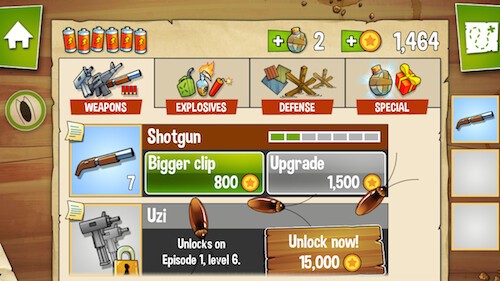 For a free game you can't really go wrong with Swamp Attack. Sure, it's another Android game that hasn't (yet) been ported over to BlackBerry World, but at least we can play it if we want. It's going to be staying on my BlackBerry, that's for sure.

As you would have seen in the video I used my BlackBerry Z30. If you manage to get the game working on a Q series device please sound off in the comments? Thanks in advance.