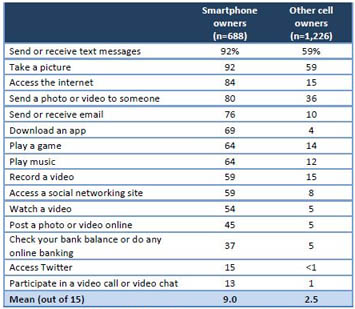 The other day, Pew Internet published their findings from a national telephone survey they performed that involved nearly 2300 adults living in the United States. They asked the questions about their mobile habits from the past 30 days; ranging from messaging habits, to social networking, to types of downloads. They went as far as measuring results by age, ethnicity and type of phone (Smartphone vs. cell phone). Here are some of their key findings from the survey:

Snapping an image and SMS are at the top of the list for both Smartphone and cell phone owners, while the Smartphone users obviously dominate social networking and internet access. To be honest, I would have thought that more people would have admitted to pretending to be using their phone to avoid human contact. Who wants to interact face to face anymore right? How would you have responded to the questions in the survey?