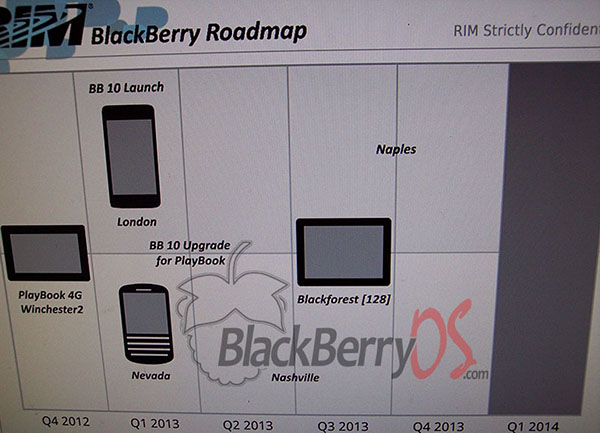 With the first BlackBerry 10 devices now delayed until Q1 2013, RIM would have had to go back and adjust their release timelines accordingly. The above image obatined by BlackBerryOS is suggested to be those updated timelines. As noted, RIM still has most of the same devices planned with a few exceptions no longer present but the time to market has been adjusted:

Sadly, there isn't much else to go on here in terms of actual dates but maybe that's a good thing considering we know RIM CEO Thorsten Heins doesn't want to put out something that isn't market ready. Either way, a timeline for launch is still a good thing to see. Now all we have to do is figure out what, exactly, the Nashville and Naples are.

One of the other items suggested with this information is that BlackBerry 10 will first launch in Europe come January, and from there will launch in North America a few weeks later. We've talked previously here on CrackBerry about how it might make sense for RIM to back its way into America after successfully launching elsewhere in the world. In Europe, getting carriers onboard for a hero launch should be doable and based on recent launches the reception to BlackBerry 10 should be a warm one.