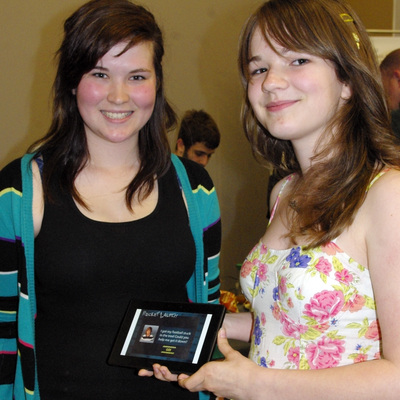 There is a lot going on in Ottawa for young people looking to get into app development. TechU.me is an organization that encourages students to pursue careers in technology through educational programming in Ottawa’s schools. Recently TechU.me hosted an App Jam at the Ottawa Game Conference where students from 12 different high schools showcased their apps, each hoping to win a $1000 scholarship and/or summer job with one of the sponsors. Several of the students created apps for the BlackBerry PlayBook, including Krista McCormick and Melanie Lapointe, whose curriculum quiz game earned them one of the seven prizes. Not only did they win $1000 from Dan Dodge of QNX, they also won BlackBerry PlayBooks from Patrick Mollins, Developer Evangelist at RIM, who was also a guest speaker at the event. The competing students were all 11th and 12th grade level, and had been working on their apps for about 2 months. The students work with industry mentors and design apps for the younger grades in their school, consulting with their "clients" on the application's design and details.

Melanie and Krista had never considered developing apps before this project, and they admitted that starting out wasn't easy.  “It was horrible, we didn’t know what we were doing, it took a lot of tries to get it to work,” Melanie said. “At the end of the project, I was happy it was over, I never thought about going into this kind of career, but now, it sounds so interesting.”  The girls were working with a 7th grade class on the app. “They (the Grade 7 class) really wanted to have a rocket in the app, so we put it in.” McCormick said. “If they get all the questions correct, they get to launch a rocket into a tree.” After this experience, both girls said that software development is a carrier they're now interested in.

The girls weren't the only ones that got BlackBerry PlayBooks that day, and in fact all of the students that made apps for the tablet received one, as well as some participants that had developed apps for other platforms. The Ottawa Game Conference is designed as a showcase in global industry advances and a forum for strengthening the development industry in the Ottawa area. What better way to strengthen the development industry than by engaging youths and getting them interested in app development through programs such as TechU.me? I'm sure next year we'll see more students developing apps and competing, but by then time it will be for BlackBerry 10!