The FIRST of TEN WINNERS in our
What Would You Do for a BlackBerry Storm? Contest!

Within the over 3,000 entries received for the the What Would You Do for a BlackBerry Storm? contest, a popular theme of entry that emerged was extreme brand loyalty, or in other words, showing off your love for BlackBerry and/or CrackBerry for the whole world to see.

Enter the tattoo. Nothing screams more loyalty than a BlackBerry for Life! 187 CrackBerry Addicts said they would be willing to get a tattoo of the BlackBerry or CrackBerry logo (a few even said they'd get one of the device) for a FREE BlackBerry Storm. Of all these entries, it was T.J. from Toledo, Ohio, who's descriptive and over the top submission has now earned him a free BlackBerry Storm:

I will get a lifesize tattoo of a Blackberry Storm with the CB logo. And below the Storm, I will get iPhones Suck tattooed (which could put me in harms way because my tattoo artist is a DIE HARD iPhone/Apple user. He has 3 Macs at the shop!!) Remember, A tattoo IS FOREVER, fighting a bear is only momentary...lol.

As if this awesome tattoo wasn't enough, you just gotta love how T.J. threw in the extra twist of having Apple Fanboy, Brian Krabach of Revelation Tattoos, be the one to do up the tattoo. You can almost see the tears in Brian's eyes. :-)

Congrats T.J.!! You're a deserving winner and that is one Kick A$$ tattoo! CrackBerry Addict for life!!! You earned the bragging rights! You can watch T.J.'s video "evidence" above and check out the photo gallery after the jump! And you'll want to keep it locked to CrackBerry.com... we'll be posting all ten winning entries as they come in! 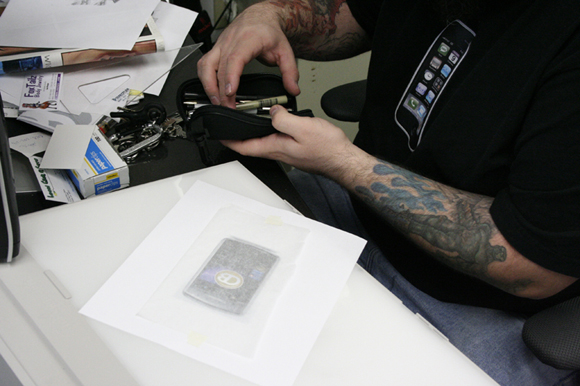