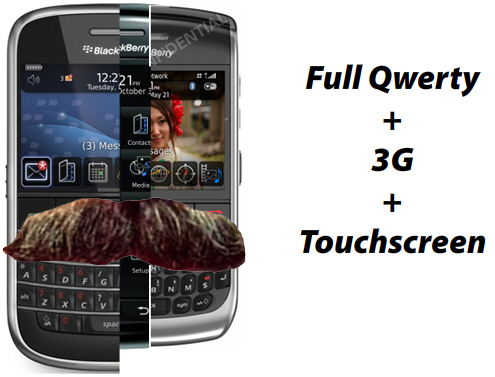 (another, slightly more "official" image after the jump)

Update 2: Here's what I was waiting for...update from BG: "A little more info for you - we're now hearing it will be called the BlackBerry 9900 and it's currently codenamed Pluto up in Waterloo. We're also told to expect a Q3 / Q4 2009 release, you know, delays aside."

Update 1:  OK... it's Friday. My BRAIN HURTS. The boys and girls in Waterloo are working too hard it seems on new BB device models, cause it's getting way too unwieldy to keep track of. Apologies on any confusion. Looks like the 9220 we reported on back in August is not the same device BGR posted on this morning. As suggested previously by Stop-N-Go previously, there will be a 3Ged up mini-Bold/Javelin-like type phone (the Magnum codename should fit the bill for that baby), but that's different than the device posted today. I'm sure BGR will follow up soon with the device model/codename on this new one (updated: codenamed Pluto). And as mentioned earlier, we've heard other codenames floating around like Onyx, Jupiter and Collosal that may at some point meet the blogosphere with specs and pics (and I'm sure there's other names out there too, or like the Storm/Thunder, apparently two names for the same device). Will update this when we see more details. In the meantime, I'll leave the 'stache on the pic above cause it looks soo good (and it was a Magnum P.I. like 'stache, not a turd!). Sorry folks.. always just doing the best we can here. Not 5pm yet, but I need a drink! **

Too Much fun for a Friday! So BGR busted out some news this morning about a new device coming out of Waterloo (likely to be announced at WES in May 2009). And as I was about to post y'all the codename for this new device it looks like BBNews beat me to the punch. But that's ok folks... what's cool here are the details!!

Remember we dropped word of the BlackBerry 9220 a while back (mentioned by the ever-trusty Stop-N-Go in the CB forums)? The device everyone is talking about today is the one we mentioned back on August 18th. The codename is "Magnum" (awesome!) and you can think of it as the BlackBerry Bold / Curve 8900 / and Storm jammed into one. Smaller, Faster & Touch!

GSM device... it'll feature the 3G stylings of the Bold, a tighter former factor (more akin to the Curve 8900, yet different... sort of a pancake (flatter), tighter Bold), and last but not least, a physical keyboard and a touchschreen! Start saving your pennies... looks like you'll be spending a lot of $$$ on BlackBerry smartphones in the next 12 months. Now how are we ever going to top our What Would You Do For a BlackBerry Storm? Contest come May?!