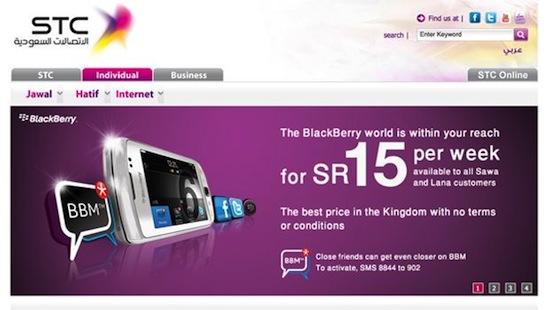 The Saudi Telecom Company has signed a partnership with RIM on Monday with goals to provide the end user a wider range of content, applications and solutions across the Kingdom of Saudi Arabia. As a result of the new partnership, STC announced the launch of the BlackBerry Bold 9900, making it the first BlackBerry 7 enabled handset to hit the Middle East.

"The strategic partnership between STC and RIM is based on launching the level of coordination between the two companies in order to serve their common interests and fulfill customers' need for technologies and unique services. STC's interest in this partnership confirms its major role in launching and providing current and new smart devices to its customers, which is based on STC's strategy that revolves around the customer. STC was the first to bring the blackberry services into the Kingdom giving it a leading market position there, and resulted in doubling the number of customers in the BlackBerry service, which prompted us to meet their expectations by providing services and products that suit various tastes."