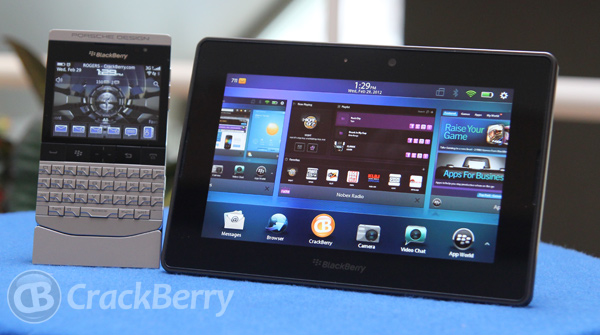 A couple weeks back Mobile Nations surveyed its readers on our various platform-centric sites. We asked you questions about your computer, smartphone, and tablet buying history and plans.

The data was intriguing and interesting to dig into. After staring at the results and applying various filters to the data, one big conclusion became crystal clear: Smartphone enthusiasts most often buy tablets that match their existing phone's OS. In other words, people pick their flavor and stick to it.

And how about BlackBerry? A whopping 89% of BlackBerry owners in the survey who own a tablet just happen to own a PlayBook. Obviously many CrackBerry readers are early adopters who are more likely to attend a BlackBerry event, or submit a PlayBook app, earning themselves a free tablet. But still, the data suggests there is a significant degree of platform loyalty.

This reinforces my view that RIM needs to market the heck out of its phones. The strategy needs to be: 1) Sell as many BlackBerry handhelds as you can; 2) Let those sales drive inevitable PlayBook demand.

In the USA and other developed markets, BlackBerry 10 is obviously important. The USA is a market where tablet adoption is happening now. RIM can't afford to lose subscribers. BlackBerry 7 may not have the application support of iOS or Android, but there's no question that devices such as the Bold 9900 perform like they should. I'm disappointed that RIM has let marketing take a back seat for so long. This needs to be fixed yesterday.

In emerging markets, RIM will obviously be pushing Java-powered BB7 devices for at least a couple more years. This is absolutely the right strategy unless BB10 can be deployed on ultra-cheap hardware, which it probably can't (yet). Rumors of a BlackBerry Curve 9320 for India suggest that RIM will keep going after the emerging markets aggressively.

The battle to win over feature phone customers is on. As I wrote in my article on how will we know if RIM is successful, this is a battle between vendors. The more market share RIM can earn in emerging markets, the more likely they will succeed over the next decade in the mobile computing market (which includes tablets).

The survey data is clear. Smartphone customers become tablet customers of the same flavor. I've got a couple of PlayBooks running OS 2.0 and although I'm impressed with them, there are lots of features I'd still like to see added.

But in reality, RIM should put every ounce of energy into making BB10 utterly perfect and ensuring its legacy Java OS continues to run smoothly for emerging market devices over the next few years. That's where the real battle is. Win that battle, and the tablet market comes along for the ride.