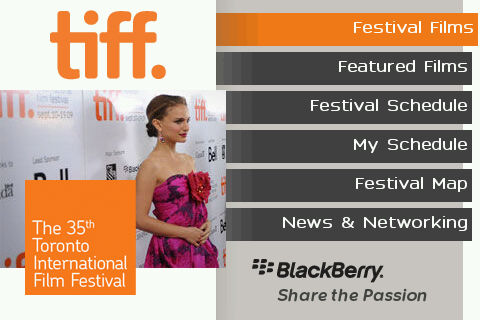 On September 9th, 2010, filmgoers, critics and celebrities alike will ascend upon Toronto, Canada for the 35th annual Toronto International Film Festival. Over a 10 day span, attendees will be able to view hundreds of films shown on approximately 37 screens in downtown Toronto. Being one of the most esteemed film festivals in the world, the TIFF typically draws in a crowd of over a quarter of a million strong annually.

The tiffapp, powered by mobile content experts Sweet Caesar, provides an excellent way to tie the big screen to your small screen. I must say, Sweet Caesar does deliver visually appealing content. tiffapp allows you to view the list of films; including the featured list. Film details are light, only providing the country, name of the director and a brief synopsis. The included festival map smoothly lets you navigate to each venue where, during the festival, you can see what’s playing, their address and their website. tiffapp also provides access to their official press releases, Facebook page and tweets on Twitter. If you have an active membership, you can also enjoy access to the Maverick program; a program of discussions. The application also boasts future upgrades, which will hopefully arrive before the start of the festival. These upgrades include the Festival Schedule and your own personalized schedule as well. You can nab the tiffapp from BlackBerry App World for Free.