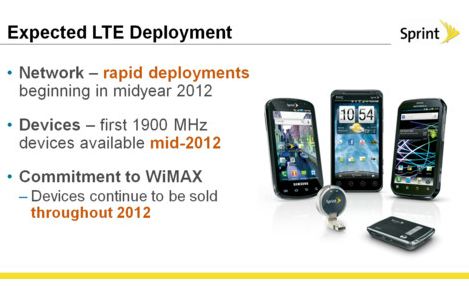 At Sprint’s Strategy Event today, plans were announced to convert the carriers CDMA 19900 MHz spectrum to LTE. Awaiting a nod from the FCC, this switch will also include making use of LightSquared’s 1600 MHz spectrum. The first wave of LTE markets and devices (hopefully including BBX BlackBerry SuperPhones) will quickly roll out sometime in mid-2012 and a complete implementation by 2013. They plan to provide 176 million people with coverage from both WiMAX and LTE by the end of 2012; and an expected 250 million people covered under LTE sometime in 2013. Sprint’s Direct Connect, 3G and 4GLTE networks will be combined into a single architecture (their Direct Connect service is replacing their stagnant, obsolete iDen service).

This is an aggressive undertaking that will see both CDMA and WiMAX eventually shuffle off into the night. With this complete conversion, Sprint is going to need devices to support LTE. Could we see an LTE supporting BBX BlackBerry SuperPhone at the time of launch? A couple of weeks ago, Kevin made mention of the L3; an internally named full touchscreen BBX BlackBerry SuperPhone. Wouldn't it be pretty convenient to see it at the front line for the LTE launch? I hope so because I certainly don't see one in the image above!