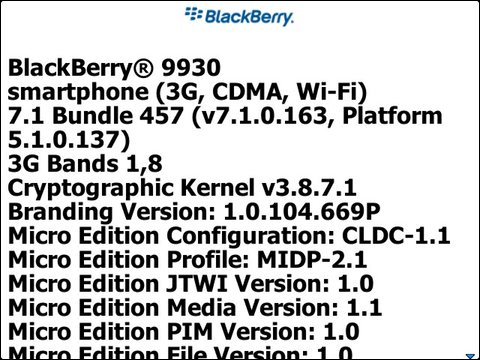 A few hours ago I heard a rumor that Sprint was supposed to be rolling BlackBerry 7.1 out to all compatible handsets come tomorrow and before I could even have a chance to blog the rumor up, jtels2593 and CMHBerry in the CrackBerry forums opened up a thread letting everyone know the update had indeed turned up on their devices.

For now, it appears to only be an OTA update but it's expected a Desktop Manager installation alert will be along shortly as well as a direct install file from the Sprint BlackBerry downloads page and in case you forgot what all BlackBerry 7.1 entails -- the biggest feature addition is the Mobile HotSpot functionality we've seen in previous leaks but no word yet on whether or not Sprint plans on making that an included feature or a seperate fee.

So, go ahead and hit that check for software update button. You may have BlackBerry 7.1 (OS 7.1.0.163 specifically) waiting for you to download, but if not -- sit tight cause it seems Sprint will continue to roll it out between now and tomorrow, though what devices aside from the BlackBerry Bold 9930 remains a mystery for now. Sound off in the comments if the update is showing for you.