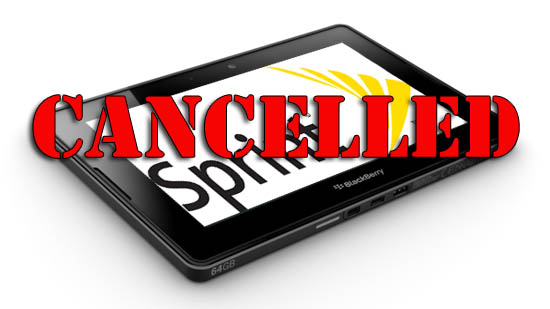 *Update: RIM has issued a statement following this announcement by Sprint.

RIM Statement - August 12, 2011
RIM has decided to prioritize and focus its 4G development resources on LTE. We remain excited and committed to delivering innovative and powerful 4G tablets to the US market together with our carrier partners. Testing of BlackBerry 4G PlayBook models is already underway and we plan to enter labs for network certifications in the US and other international markets this fall.

So don't give up yet if you were waiting for the 4G version of the PlayBook. It's still coming, we just don't know when or which carriers will end up with it.*

If you were patiently waiting to get your hands on a 4G PlayBook from Sprint before the end of the summer, your wait just got a lot longer. Just as we thought we were getting closer to seeing a 4G BlackBerry PlayBook arrive on Sprint, the company has stated that they have cancelled all plans to make the tablet available for sale. Sprint claims the PlayBook "just hasn't caught on with business customers" and "There are so many tablets in the market, it creates confusion for the average customer". Back in January Sprint announced they would be carrying the PlayBook but we never received an official release date. So with this news it looks like none of the major carriers are on board to pick up the 4G PlayBook just yet and leaves us asking just when we'll actually see it hit the market.