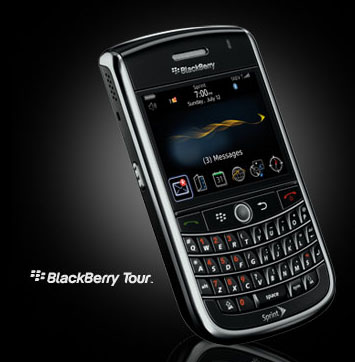 The new BlackBerry Tour smartphone launched on the Sprint Network last month, and it was a highly anticipated device for many Sprint users. Up until the launch of the Tour, the only options for BlackBerry smartphones for Sprint users were the Curve 8330, 8830 World Phone, and the Pearl 8130. While these are all great devices, none of them could compare to the BlackBerry Bold that was launched on GSM carriers almost a year ago.

Sprint had some initial launch issues with device shortages, and even a little mix up with a Sperizon device being sent out. Seems things to have simmered down a bit, and now it's time to get down to the nitty gritty with a device review. So sit back and relax, and let the good times begin.

What comes in the box

Before we can talk too much about the Tour, let's go over what to expect with it:

Right from the start, the Tour feels good in the hand. It has very similar stylings to the BlackBerry Bold, but it is smaller in size, so in that respect it is closer to the size of the BlackBerry Curve 8900.

It is very similar to the Verizon Tour, but has a few minor differences such as a chrome bezel and a smooth battery door with no texturing. I personally like the chrome look, but I also know several of you will like the darker charcoal look of the Verizon Tour bezel. I'm sure parts will be available soon so that you can change the bezel to one of your liking, or even better yet if you have the cash, consider ColorWare.

Also included on the Tour, is the addition of the black trackball. This was first seen on the Curve 8900 and has been a fan of many users. I personally prefer the black trakball. It seems to roll smoother, and most importantly, it doesn't show dirt like the white trackballs do.

The Tour is loaded with features to make it both a business and a consumer device. First and foremost, it is a world edition phone. As previously stated, it operates in the US on Sprint's CDMA network, but also has GSM capabilities for when traveling overseas. The Tour comes loaded with a Sprint SIM card, but users can have their device unlocked, and then obtain a local SIM card from whatever area they are traveling in.

Another added bonus on this device is the 3.2MP auto focus camera. Since the camera was first introduced on the BlackBerry Pearl, it has constantly improved year after year. It took a little getting used to for me, but I think I've finally mastered the camera and have been able to take some excellent pictures.

The Tour is jam packed with many other features as well, but the one thing it didn't come loaded with is WiFi. In my opinion, this is the one thing that would've put the Tour over the top. Maybe I've just been spoiled by having it on my past three BlackBerry devices. Sprint has a pretty zippy network with their 'Rev. A' speeds, but I still enjoy being able to use WiFi for web surfing when it's available. The good news is that RIM should/will be including WiFi on all future CDMA devices, meaning this is hopefully the last time we'll ever have to gripe about lack of WiFi.

I've been part of CrackBerry.com since the site first launched, and have talked to many people on the forums, in person, and via BlackBerry Messenger, and a question I frequently get asked is what carrier has the best coverage. My answer to them is I don't know. Each person needs to answer that question for themselves. Check each carriers coverage maps, and then start talking to people around you and get some real life experiences. I hear all too often that Sprint would be a better network if they just had better coverage. I have limited experience with Sprint, but what I can tell you is that from what I have observed they have outstanding coverage in my area. Many places that I went to where I used to have no coverage with AT&T or T-Mobile still have bars of service on the Tour. I was very impressed. Calls were clear, and I never once experienced a dropped call. The only location I found an issue with signal was at my own house, but to be fair, the Sprint coverage maps indicate that as well. I would still get a signal, but sometimes only one or two bars. However, even with a low amount of bars, I did not have any problems with call quality.

Battery life on the Tour has been most impressive for me. I am used to a Bold where I could never make it through a day on one charge. I never once had an issue with the Tour running out of power before I was ready for bed. I am generally a heavy user of my devices, and the Tour stood up well to the challenge.

An added bonus to the Sprint Network is their Simply Everything plans. I think by far, they have the most bang for your buck. It's nice to see a carrier include so many things for one price, and not nickel and dime you to death for every little added feature. I found myself using Sprint Navigation powered by TeleNav frequently. The Tour would quickly lock onto to a satellite with the built-in GPS, and after entering where I wanted to go, I was off to the races with voice guided directions and maps.

Sprint also has these great features included for no additional cost on all data plans:

My final thoughts on the BlackBerry Tour 9630 are that it is awesome! If you are on Sprint, or thinking about joining Sprint, this is the BlackBerry you must have. Combine this awesome BlackBerry with Sprint's Simply Everything plan and you'll be set for just $99.99/month. I honestly wish all carriers offered a great deal like this.

The Tour is a fast device, running the stable BlackBerry OS. The addition of the 3.2MP camera and world phone capabilities make this device a must have. If you are interested in picking one up, you can head over to the CrackBerry Wireless Store where the Tour is just $169.99 with a new 2-year agreement.