The new Sprint BlackBerry Curve 8530, or Curve2 as it has been referred to, launched on the Sprint Network last month. A solid month after the Verizon Curve 8530 launch. There was not much hype with the launch, and numerous people I have talked to weren't too excited about it either. They have the Tour, and don't see why they should be excited about this device.

Well, let me tell you, although the Curve 8530 doesn't have all the luxury of the Tour, it does have quite a few bells and whistles that the Tour doesn't have. In my opinion, those few things, make this the device of choice for me. We'll cover all these changes as you continue reading. 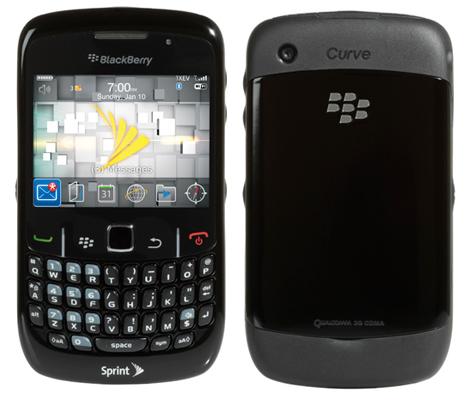 What Comes In The Box

Other than the obvious Curve 8530 device itself, it comes with a standard 1150 mAh lithium ion battery, micro USB travel charger, sync cable, basic stereo headset, and a 2GB microSD card. I was very disappointed that it did not come with a carrying case, but many people are seeing this more as an entry level device, and if that's the case, I can understand leaving out a case.

The hardware of the Curve 8530 is similar to the Curve 8330, but yet it also has some great differences. Size wise, the device is virtually identical to its predecessor. The screen resolution is the same, the camera is the same, and so is the battery. Now enough with the similarities, let's talk about the differences. The Curve 8530 is the first BlackBerry Smartphone on Sprint to have Wi-Fi. This gives users the ability to enjoy faster downloads when connected, and the ability to have simultaneous voice and data usage.

External media controls have been added to the top edge of the device, giving the user the ability to play, pause, fast forward, or rewind whatever media they are playing at the time. This can especially handy if you carried your BlackBerry in a holster; there is now no need to remove the device from the holster to control the media.

What else could I tell you about the hardware, hmmm... let me think... Oh yeah, it comes with the new optical trackpad! In my opinion, this is the biggest improvement RIM has made to its devices. All too many times with my previous trackball devices did I have issue with the trackball getting dirty, and thus not working in some form or fashion. On the old Curve 8330, the trackball was easy to replace, but on newer devices like the Tour you had take the device apart to replace the trackball. Now that the trackpad has surfaced, I don't see navigation problems being an issue anymore because of a dirty controller.

Lastly, the internal flash memory has been upgraded to 256MB, which is considerably more than the 96MB that came loaded with the Curve 8330. The increased memory gives the user the ability to add more applications, and the user should not notice the device getting sluggish as it often did with the original Curve due to lack of memory.

As on all other new BlackBerry devices launching now, the Curve 8530 comes loaded with the new OS 5.0 software. To be more specific, it comes loaded with 5.0.0.395. Even though the newer OS was loaded, it still had BBM 4.7 pre-installed. This was an easy fix, as all I had to do was go to App World and download BBM 5.0, but I still wonder why it wasn't loaded in the first place since it was available at the time of launch.

Many applications users have come to rely on are preloaded on the device such as the IM applications, social networking apps, and of course BlackBerry App World. Something Sprint offers that Verizon does not on their Curve 8530, is the inclusion of a folder they have labeled as Sports and Entertainment. Inside this folder is: NASCAR Sprint Cup Mobile, NFL Mobile Live, Sprint TV, Sprint Music Store, Pandora, and Pocket Express. Now the latter two are available to all BlackBerry users regardless of carrier, but the first three are Sprint specific. They offer some great content, and that content is included at no extra cost as part of your Everything Data plan. This equals out to more bang for your buck with Sprint. No other carrier offers that content as well as Sprint Navigation powered by TeleNav for one all inclusive price.

Many people have labeled all 85xx series devices as entry level devices. While I do beleive that the price point on these devies points in that directions, actual hands-on use dictates otherwise. Just because it does not have all the features as its big brother the Tour 9630, doesn't mean this device is the runt of the family.

For a long time, most BlackBerry users thought the Curve 83xx device was top of the line. The only thing that changed this opinion, was the introduction of devices like the Bold, Curve 8900, and Tour. My point to this is that at one time or another, most of us felt that what the device offered was great, and we were happy with it.

For my review, I did the best I could to imagine that I was a first time user with a BlackBerry. I found that the device can easily stand up to everything that a BlackBerry is supposed to do, and actually offers more than the alleged luxury device, the Tour 9630.

Call clarity was superb, email was pushed as it should have been, and my calendar never let me down on appointments and reminders. If any of you remember my Tour 9630 review, you will know that Sprint coverage at my house is not that great. This was not only an issue with calls, but also with data. Now that the Curve 8530 has Wi-Fi, the deficiences in data due to lack of signal have been eliminated. This does not solve my calling issues, but as I mentioned in that review, my coverage is exactly as expected at the house according to Sprint coverage maps. I apparently live in one of those cell phone dead zones, as I have this issue with every carrier at my house.

Like most other CrackBerry addicts, I always have my hands on my device. The new addition of the media controls made my life easier as I was enjoying media, and the trackpad made navigation much more simple. I had many of my co-workers ask me about the device, and I enjoyed getting to show off all the new features of the Curve 8530. I think there may be some new BlackBerry users coming on board soon.

The BlackBerry Curve 8530 is a welcome addition to the BlackBerry lineup on Sprint. It may be thought of as an entry level device to some, but I know there are plenty of others who if were to buy a new BlackBerry today, would choose this device over the Tour. For me, it's the simple addition of Wi-Fi and the optical trackpad. The screen resolution is not as good as the Tour, but unless you plan on watching lots of videos, it is more than adeqaute for the job. Overall I think it's a great device, and it worth a look if you are interested in getting a new BlackBerry.