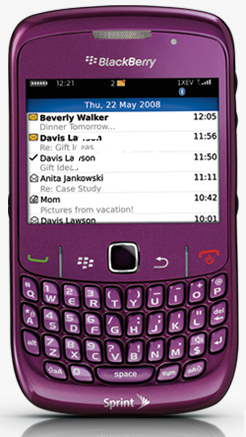 You didn't think it was only Verizon that would be getting the BlackBerry Curve 8530, did you? Sprint users looking to get there hands on the new Curve can sign up now to be notified of its release, which we'd imagine is coming soon... no pricing and release date have been announced just yet. Oh, and in case you don't like the Royal Purple color pictured above, it also comes in black.

OVERLAND PARK, Kan.--(BUSINESS WIRE)--Nov. 5, 2009-- Sprint (NYSE: S) announced today it will add the new BlackBerry Curve 8530 smartphone to the wireless industry's best lineup of devices. Beginning today, customers can visit http://www.sprint.com/blackberrycurve8530 to pre-register for this next generation of the popular BlackBerry wireless device on America's most dependable 3G network1 with the affordability of Sprint's Everything Data plans featuring Any Mobile, AnytimeSM. Pricing and availability will be announced at a later date.

BlackBerry Curve 8530 smartphone makes it even easier to enjoy music on-the-go with dedicated keys to skip to the next song on a playlist, pause or play. It comes preloaded with several multimedia applications including BlackBerry Media Sync, Sprint Music Store, Sprint TV and Pandora. It also boasts dedicated applications for a smoothly integrated social networking experience with Facebook, MySpace and Flickr. BlackBerry Curve 8530 will be available in three color options - Black, Royal Purple and Red.

"BlackBerry Curve 8330 has been a tremendous success for Sprint. BlackBerry Curve 8530 continues that legacy with the addition of several important features that make it a winner for both entertainment and productivity," said Kevin Packingham, Sprint Senior Vice President of Product Development. "This is one device that can really do it all with the email, calendar and contact synchronization BlackBerry is known for as well as the latest multimedia and social media features. We are anxious to bring it to our customers who also appreciate the strength of our network, the affordability of our rate plans and our Ready Now customer service experience."

Sprint's BlackBerry Curve 8530 will offer BlackBerry App World for instant access to thousands of applications. Sprint has employed an open Internet approach, and the Sprint Application Developer Program has been providing tools for third-party developers, since Sprint first launched the Wireless Web on its phones in 2001.

Sprint's affordable Everything Data plans now include Any Mobile, Anytime, a feature that removes restrictive calling-circles and provides unlimited calling on the Sprint network to and from any U.S. wireless phone regardless of carrier, at no additional charge with Everything Data plans starting at $69.99 per month (all price plans exclude surcharges and taxes).

Sprint's Simply EverythingSM offers nationwide unlimited calling, unlimited text and unlimited data, including email, social networking, Web browsing, Sprint Navigation, Sprint TV, streaming music, NFL Mobile Live and NASCAR Sprint Cup Mobile, for only $99.99 per month (plus taxes and surcharges). That is a $1,200 savings over two years versus a comparable AT&T iPhone® plan2. Both Everything Data and Simply Everything plans are available to existing customers without extending their service agreement. New lines of service require a two-year service agreement.

According to Sprint performance data, Sprint Mobile Broadband connections are successfully connected and maintained better than 99 out of 100 times. According to a recent independent network test conducted by PC World, Sprint tested as the most reliable network overall among US carriers in a 13-city performance test4.

Sprint is the first national carrier to test, launch and market 4G technology. Separate from its 3G investment, Sprint has announced plans to extend its 4G leadership by launching the next-generation service in numerous markets in 2009, including the recently launched markets of Atlanta, Las Vegas, Philadelphia and Portland, Ore.

Sprint is also the only wireless carrier to offer Ready Now service with trained retail associates to work one-on-one with customers to personalize their BlackBerry Curve 8530, set up features and demonstrate how it works before the customer leaves the store. Customers have the choice of sitting down with a Sprint retail associate at the time of purchase or they can schedule an appointment for a later time at www.sprint.com/storelocator.