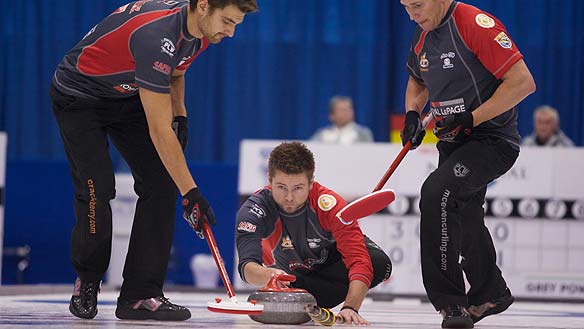 Not familiar with curling? Check out the wikipedia page to learn more.

* Update: Wow. It came down to the final rock in an extra end of play, but we pulled it off. Team McEwen wins their second Grand Slam of the year! *

Like the sport of curling? If you do, or want to check it out for the first time, be sure to tune into CBC television today at 1pm ET (viewers outside of Canada can watch online) to watch Team McEwen take on Team Howard in the finals of the BDO Canadian Open, which is the third Grand Slam of Curling event this season (where the world's best curlers from around the world play for $$$ and glory).

I'm actually the 5th man (alternate player... if one of the boys is sick or has to miss a game I fill in) for Team McEwen and personally sponsored them this year - you gotta love the CB logo on the jerseys and crackberry.com down the pants! And what a year it has been. The team is sitting at the top of the World Curling Tour money list for the 2010/2011 season, and is also ranked #1 in Canada on the CTRS points system which is used to determine which teams will go to the Olympic Trials to duke it out for who gets to play for Canada in next winter Olympics. Team McEwen won the first Grand Slam of the season, lost out in the semi-finals of the 2nd Slam after going undefeated in the round robin, and are undefeated this week leading up to the finals against Howard, who has the homecrowd advantage with the event being held in Ontario. It should be a great game.

If you're curious to meet the CrackBerry curling team, I've posted a couple of Team McEwen videos below (and yes, everybody on the team is a hardcore BlackBerry user and we have a BBM group to keep things in order). As for the question of can I get a curling game for my BlackBerry? the answer is you used to be able to... Curling Challenge was one of the first reviews I ever wrote for CrackBerry back in 2007 when I played it on my 8700. It looks like the game is no longer available though, so it would be great to see a good curling game hit for the PlayBook!

For more info on the team, be sure to check out mcewencurling.com and you can also follow us on twitter at @mcewencurling. That's it. Rock on! Be sure to tune into the game!