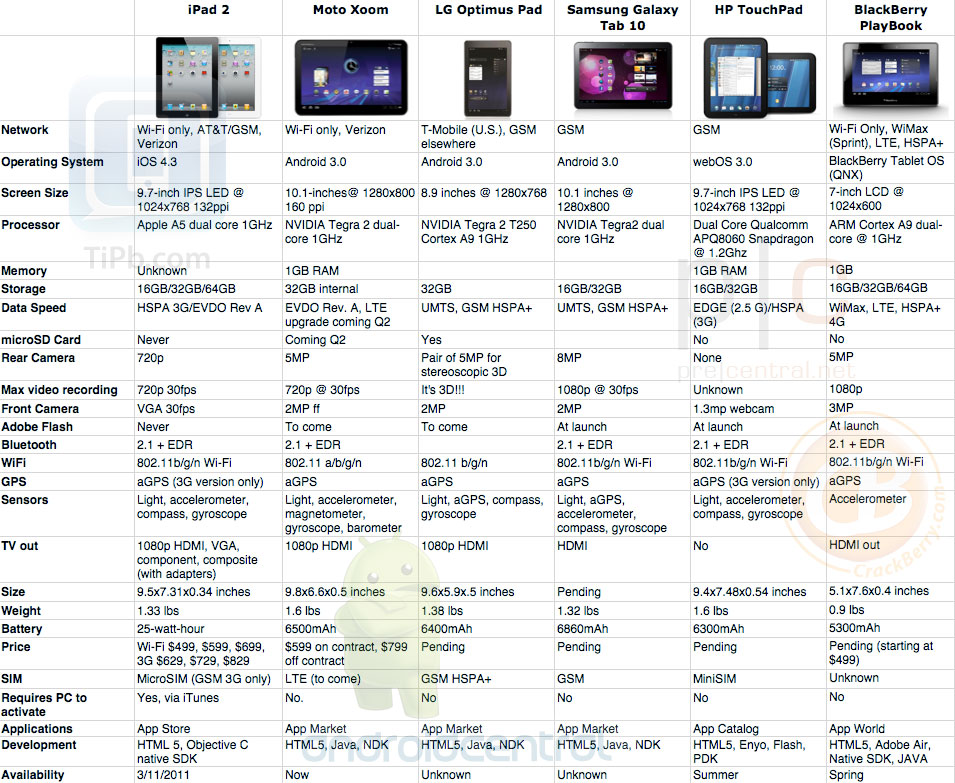 After Apple's media event yesterday, the stage is now *relatively* set for the 2011 tablet wars. RIM has the BlackBerry PlayBook, Apple has the iPad 2, HP (formerly Palm) has the TouchPad, and there are a bunch of Android 3.0 tablets in the mix like the Xoom, Optimus Pad and Galaxy Tab 10 (and I'm sure we'll see a whack load more of Android tablets before the year is through). The chart above nicely sums up where things stand right now and while I think it's hard to declare a "winner" here based on the tale of the tape, one thing that is certain is there will be no lack of options for enterprises and consumers looking to pick up a new tablet in the near future.

I was definitely choked to find out that the iPad 2 will hit the market before the PlayBook (seriously, like wtf?!), and was kind of impressed to see Apple borrow from RIM's playbook and put some smart magnet case technology to use on the iPad 2. At the same time, I was surprised that Apple didn't actually deliver more with the iPad 2. Flash support is still missing from the web browser (which as current iPad owner drives me nuts) but even on the hardware side Apple didn't do anything to really leapfrog the upcoming competition - the display resolution on the iPad 2 is the same as on the iPad classic, and there's still no cool gesture areas like the PlayBook makes use of. Even though 15 million iPads shipped to date sounds like a big number, when you really think about it, it's a tiny number compared to the potential market for tablets out there (how many billion people are there in the world these days?!). While Apple has a great brand, a headstart and is a mega marketing machine, I definitely think it is still in the early days and we'll see a pretty good battle over the tablet market share take place in the quarters ahead (my bet is on RIM ending up in the #2 spot for tablet manufacturers behind Apple and more likely #3 as a platform.. remember that Android is a platform and has several manufacturers).

Looking at the chart above, I can't help but wonder which factor(s) will ultimately play the most important roll in determining what tablet a consumer ends up buying. Is it size? Is bigger better? Or is smaller better so you can take it with you everywhere? Do the latest and greatest specs really matter with tablets? Or are they all good enough that it doesn't really matter which one you go for? If so, is it the apps catalog that matters? What about multitasking? What about flash? Or are tablets fashion this point? Would somebody pick an iPad over an Android tablet simply due to the Apple brand? I know us smartphone/tablet enthusiasts will have our favorite(s) based on a number of factors, including platform loyalty, but I'll be really curious to see over time which factors uitimately influence the average joe. With the BlackBerry PlayBook and BlackBerry Tablet OS, I think RIM has a great product and a great platform to build on, but they'll also will have a lot of competition and some catchup to do (that baby needs apps fast!). Fun times are ahead for sure.

So where do you weigh in on all of this tablet stuff? Let us know your thoughts in the comments!