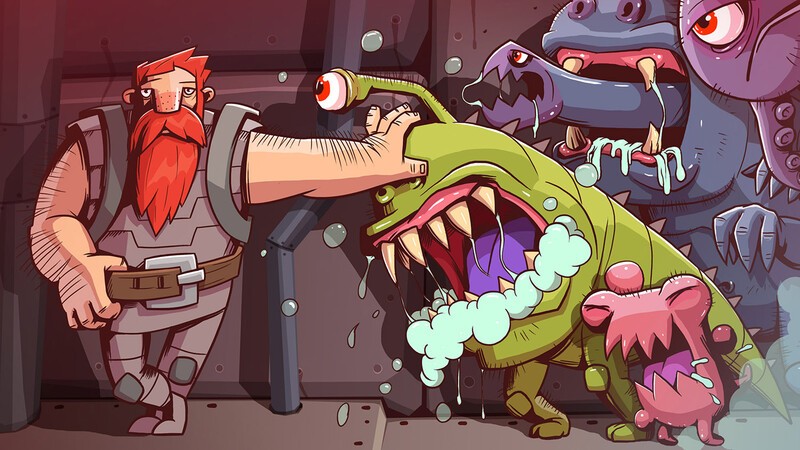 It's not often I go digging into the games section in BlackBerry World but when I do, I often find some hidden gems that I have overlooked. Such is the case with SpaceBeard from Noxus Limited that arrived way back in April. The name and icon for the game were just ludicrous enough to draw me in so; I paid the $1.99 to download it and give it a go. The artwork is excellent, the gameplay is fantastic and the fast pace of it all keeps me interested in 'just getting to the next level'.

Commander SpaceBeard's spacecraft is under attack. Stranded in space he has no option but to fight! Arm him with an array of arsenal and get to work doing battle with alien bugs in a fight for survival. Collect coins scattered around the spacecraft, trading them for weapons and armor upgrades.

Avoid obstacles while running and battle your way towards higher scores. From Bazookas, Harpoons to Lasers and many more deadly devices, each weapon is designed to take out certain zombie alien bugs quicker and faster than the other. Be WARNED, SpaceBeard requires quick player reactions! FIRIN' MAH LAZER!! … Expect huge EXPLOSIONS!

I've never heard of Noxus Limited before but looking at their site, they're an indie game development studio that offers a lot of exciting and visually appealing games. SpaceBeard is just one of their three awesome games available on BlackBerry World. You can check out the SpaceBeard gameplay below in the video and if it looks like something you would be interested in, be sure to grab it from BlackBerry World. It is available for most BlackBerry 10 smartphones.