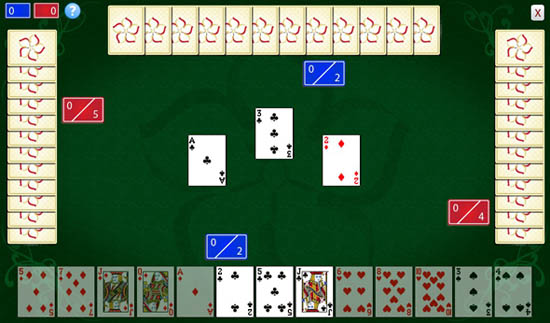 To be honest, I haven't been much of a card player lately. During lunch time at school, my friends and I could be found playing various cards game most of the time. After that, it was the rare poker night or the more frequent game of solitaire on my computer. I found that it helped me wind down and I really wanted to take that with me without having to carry around a deck of cards. After grabbing my PlayBook and hitting up the Card game section, I decided to give SouthernTouch Spades a try.

I've never played this type of game before, but I was willing to learn. The easy to follow Help menu taught me the concept of the game play and covered bidding, as well as scoring. Essentially, SouthernTouch Spades is a game of trick taking and is played with two teams of two. Each player has to bid on how many rounds or tricks they expect to win. The teams will gain points if matching, or surpassing the bid, while failing to meet the bid will cost a team points. It doesn't take long to pick up on the game and it's proved to be quite addictive. In the description, the developers mention that their AI "understands the concept of teamwork, and your digital partner will play cooperatively." I expect that they should or else they're getting their shins kicked under the table.

Game play was impressively responsive and the graphics were crisp; you could almost feel the texture of the green felt table. You could end up playing SouthernTouch Spades over and over again, but if you find yourself giving names to the other player…I strongly suggest you put it down for a while. You can pick up SouthernTouch Spades for $0.99 from BlackBerry App World.