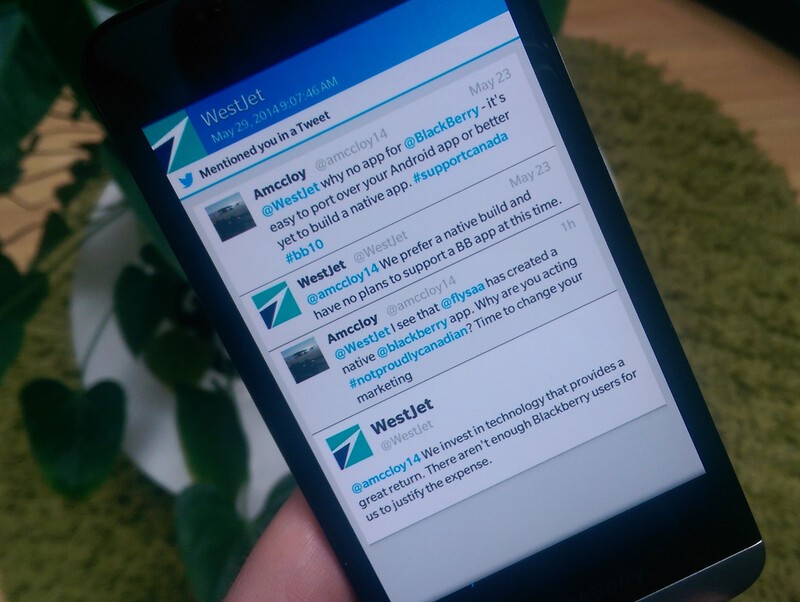 Earlier this month, Canada-based airline WestJet rolled out their app for iPhone, following up on their Android app which was released late in 2013. When WestJet announced their Android app, they were socially savvy about it, going so far as to embed the tweets of people complaining about their historic lack of apps into the app announcement post on their WestJet blog.

Since twitter complaints seemed to work for Android and iOS users, I'll follow the same logic by bringing some attention to @ammccloys' twitter conversation with @westjet this week regarding WestJet's development —or rather lack thereof —of an app for BlackBerry.

@CrackBerry perhaps an article about how "Proudly Canadian" @westjet is acting. Time to call out some companies pic.twitter.com/I193VD6YHN

Shunning the idea of porting their Android app over to BlackBerry 10 (which wouldn't be a big investment and would make a lot of Canadian BB10 users happy at a minimum), WestJet further went onto explain that there are not enough BlackBerry users to justify their return on developing a native BlackBerry 10 app.

For a company that prides itself on being "Proudly Canadian", it's not exactly the type of response I'm overjoyed at reading. Also, if there's one place where there is a high concentration of BlackBerry Smartphones, I tend to find it's on Canada's airlines. Definitely on Air Canada (which has a lot of business users flying out of Toronto), and I also notice a lot of BlackBerry phones when I fly with WestJet too.

Since I'm proudly Canadian, I actually try and spread my money between both Air Canada and WestJet. In fact, just last night I dropped $1,414.65 with WestJet booking my ticket for Montreal/Miami next weekend. Good thing I didn't see this tweet until this morning. Had I read it last night I would have went with Air Canada, who was proud to release a BlackBerry 10 app.