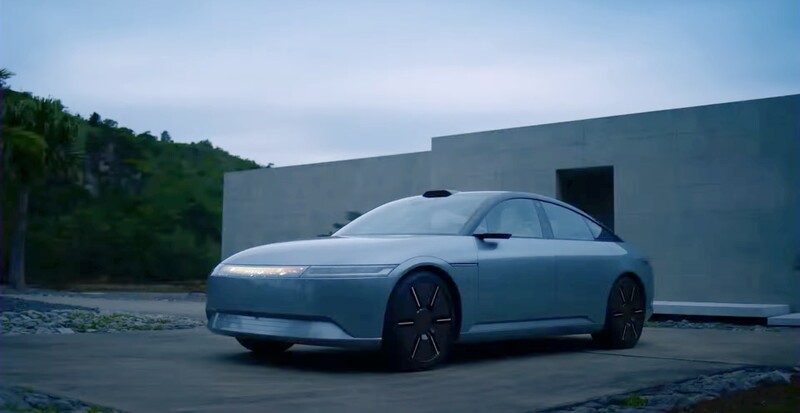 After years of teases and concept models, the joint electric vehicle venture between Sony and Honda made a significant public step towards becoming a reality today at CES 2023: it got a name and a release date.

The name? AFEELA. Okay, I guess. Whatever, I'll get used to it. But I'm not sure I'll keep typing it in ALL CAPS.

The date? Well, two dates. The first is a pre-order window opening in the USA in the first half of 2025, followed by the first deliveries in the spring of 2026.

In previous years Sony has focused on the powertrain — a respectable 400kW system with no real specs — but this year they're paying the most attention to the sensor suite for autonomous driving and the cabin infotainment, both areas that Sony has at least some expertise.

On the sensors side the Afeela prototype is equipped with 45(!) sensors, with a full host of 360º arrays for each of ultrasonic, camera, and radar, plus lidar and dedicated time-of-flight cameras. It might be the most comprehensive set of sensors we've ever seen in a car, especially compared to the mere eight cameras that Tesla is trying to make work for its purely vision-based autonomous driving system. Sony is leveraging their history with sensing machines, most notably the iconic Aibo robotic dog, but it's also been almost two decades since that toy was last sold. A lot of automakers are trying all sorts of approaches to a self-driving car, and Sony's might be the most data-rich option we've seen.

The cameras are a significant strength for Sony, who has been a leading camera and camera sensor manufacturer for decades. Sony's Alpha camera line is among the most-respected out there, and Apple recently finally made it official that Sony's been custom manufacturing iPhone camera sensors for many years.

Infotainment doesn't lean as much into Sony's strengths, in my opinion. Sony has always made excellent hardware, but I've rarely been impressed by the software running on it. And the interface for a vehicle is different than that for a phone or camera or portable music player. We'll see if Sony can pull that off, though with a slew of displays across the Afeela's dashboard and multiple screens for the rear passengers — and even one on the front nose of the car — they'll have plenty of real estate to figure things out.

Now back to that date. 2026 seems like a long way off, and the EV market is getting more crowded every day. It is a realistic timeframe, considering that even Sony and Honda combined do not currently posses all of the manufacturing ecosystem and expertise necessary to start production of the Afeela tomorrow. Honda sure knows how to make cars — I drove the crap out of an eighth-generation Honda Civic for several years and I loved it — and Sony knows a thing or two about electronics. But neither are experts at autonomous driving systems, electric cars, or massive-scale battery cell production.

Despite this being the fourth year that Sony has shown of prototypes for this vehicle, we're still not closer to answering the key questions that plague any prospective EV: range, charging, and price. But we know more now and have a date to look forward to, so that's something, right?