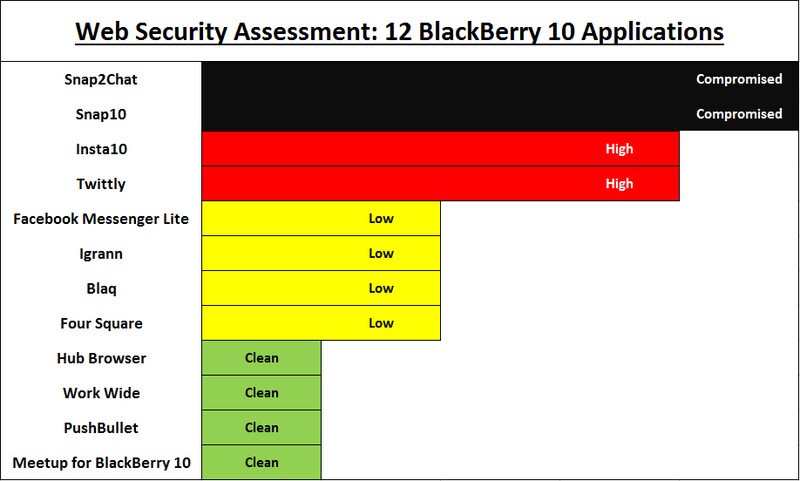 As BlackBerry users, we've become accustomed to a certain level of comfort when it comes to installing apps and not worrying about what's going on behind the scenes security wise. The BlackBerry 10 OS allows us to adjust permissions on native apps on the fly, and if we see something happening we don't like, we can usually shut it down or disable it.

But at the same time, that comfort in security can often have bad results, as well as we're likely to think just a little bit less about what's going on deep within some of the apps we install. A new report coming from Lloyd Summers over at File Archive Haven is a stark reminder to not forget about these things.

File Archive Haven has put together a test of 12 applications in an effort to dig deeper into web security for those apps and while some popular apps came out unscathed, some weren't so lucky and showed plenty of room for improvement in the security area.

After testing, the listing broke the 12 apps down in order of risk with some of the popular favorites being at the top.

As you can see from the list, some popular apps got dinged pretty hard, and others made it through just fine with no worries. The apps of interest are obviously the 'Compromised' and 'High-Risk' apps, so here's what was said about those summarized.

Notably, all the apps of concern come from Nemory Studios. With that being the case, Nemory has now responded to the concerns on his own blog and has broken down each point for folks such as yourself who might be reading the report and be concerned over any of the apps you're using. Perhaps, most importantly he has noted updates will be made to the apps when and where they're applicable to increase / improve security.

Additionally, the folks from File Archive Haven have noted the interest in obtaining the logs so as to better understand how all this information was compiled and as such have noted those logs and a follow-up article will be coming tomorrow. Needless to say, this isn't going to the be the last we'll hear of it and that's a good thing.

I fully encourage everyone to read the full article and read Nemory's replies as to the concerns as well and remember this situation when you install each and every app because everyone should be considering what permissions are being requested, what info is being requested and what you're giving up to have access to such services. Want to discuss it some more? If so, head to the CrackBerry Forums where there's plenty of discussion on the matter.