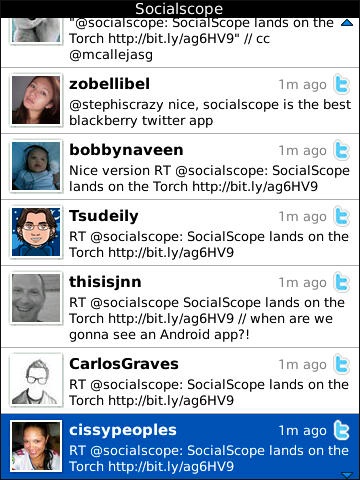 Don't shoot the messenger here but, for those of you out there lucky enough to have a Socialscope account and have recently picked up a BlackBerry Torch only to find out that it wasn't compatible, Socialscope has just released their latest update. Version 0.9.5.147 is now available for download from the Socialscope website. Lots of new goodies have been built into this release. Having been using it for the past few days now, I can say it's the most solid build to date from the Socialscope folks. Some of the changes include:

Before you fill up the post with comments asking, no we still do not know when Socialscope will roll out of beta and be available for everyone. I really do wish I had the answer to that question. Best thing I can say on the matter is that if you ask any current Socialscope user which BlackBerry Twitter client they prefer, the majority will tell you it's Socialscope and it's well worth the wait and that the FaceBook, Foursquare and Flickr integration is just the icing on the cake. Current users can grab the update now which is also available to other devices, new users can sign up via the Socialscope homepage.