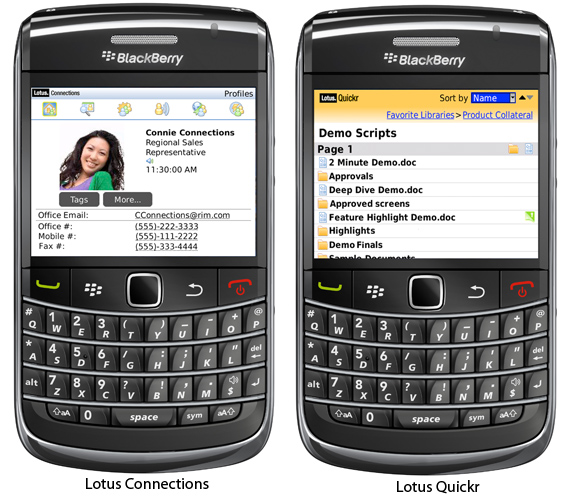 IBM's big annual Lotus Conference, Lotusphere, is taking place right now in Orlando, Florida. Research In Motion is on site as they always are, not only as a sponsor but as great contributors to the event. This year, RIM brought some new and updated business collaboration tools with them to show off that should prove to be a big hit with enterprise folks in the form of new and updated BlackBerry apps for Lotus Quickr and Lotus Connections.

This past Friday I got a run-through of these applications from Valerie Wang, who is Manager, Enterprise Product Management for RIM. While BlackBerry BIS consumers may not be familiar with IBM's Lotus software, there is a good chance those who received their BlackBerry from the company they work for and are running on a BES are. As you can imagine, there is a big overlap between IBM's and RIM's biggest customers out there in terms of organizations that have a lot of BlackBerry Smartphones installed and who are running Lotus, so RIM's focus here and IBM's distribution of the product is a natural fit.

Lotus Quickr is all about enterprise document colloboration - so right from your BlackBerry you can securely share, download, modify, upload documents and files from your device with team members. Lotus Connections is kind of like Facebook for enterprise, allowing you to access Lotus Connections profiles, bookmarks, communities, activities, blogs and more straight from your device. You can even view the chain of command so you know who reports to who and so on. The bigger the company, the more compelling this type of solution gets. What's also cool here is that these apps are running through what's called the SNAP server (Social Networking Application Proxy) which allows for CIOs and IT admins to actually see how these applications are getting used within the organization. Cool stuff.

I've BARELY scratched the surface here. For more info, you can check out the press release below, but better yet, jump on over to BlackBerry.com to view the demos.

"Just as RIM securely and efficiently mobilized Lotus Domino email on the BlackBerry platform, we are mobilizing collaboration and social networking for businesses," said David Yach, CTO for Software at Research In Motion. "We have built these powerful BlackBerry applications for Lotus Software in order to make it very easy for mobile workers to tap into their enterprise knowledge-bases and stay connected with colleagues; and, equally important, we have made it easy for IT departments to align with corporate policies and efficiently deliver these capabilities in a protected and manageable environment."

The BlackBerry applications for IBM Lotus Quickr and Lotus Connections offer a range of benefits to enterprise customers including: