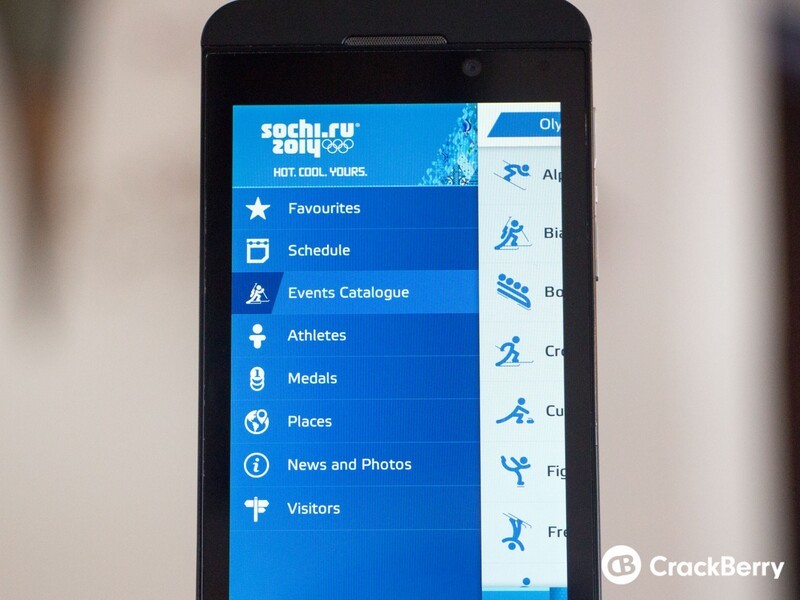 This week I had a chance to talk with one of the developers of the Sochi 2014 app for BlackBerry 10 — what will be my go to app for the Olympics this year. The app itself is beautiful. It has a great UI, it's fast, and it works ridiculously well. If you haven't downloaded it yet, go get it right now.

The Sochi app was made for BlackBerry 10 by Eventbase, a company that specializes in event-based apps. In addition to the Sochi 2014 app, they've also created the Sundance 2014 app this year as well as previous apps for the Vancouver and London Olympics. Sochi 2014 is their first Olympic offering for BlackBerry 10 however (it's also available for BB7 devices).

With the app you'll have access to everything you need during the games in Sochi. There are schedules, an event catalog, athlete listing, medals, news & photos and much more. You can stay informed with up-to-the-minute news and receive push alerts through the app, right on your device.

The team used Cascades for the entire app, migrating the BB7 app design to BB10. Using Cascades also gave them the option to have faster code exchange for other platforms as well as a faster development process. The app also makes use of Cascades transitions to give it a fast, flowing UI that fits right in with the native BlackBerry experience. The Sochi app was a big undertaking and is one of the most robust apps put out by Eventbase, but due to the scale and popularity of the Olympics it was also very necessary.

BlackBerry gave great support all along the way — from integrating the Push services to nailing down platform-specific features, the Sochi app fits in extremely well with the overall BlackBerry 10 user experience.

The app also integrates with the official data sources in Sochi during the games and actually repackages it so it can be stored on the device for offline use (social and other online features excluded). This is especially key for those that are traveling or may not have constant data access as they can still get to the info they want, when they want it. They're also using the BlackBerry Push services to bring alerts for reminders, results and more during the games. I'm told an update is on the way before the games kick off that will bring even more features into the app.

It's a drag that such a great app has such a short lifespan though. It will be an extremely popular app for just a few weeks' time, and then just go to the wayside as Olympic fever fizzles out. That's what Eventbase does though. They make awesome event apps that sometimes have a shelf-life of just a few days, then they're deleted and forgotten until the next big event rolls around. However some, like the Sundance 2014 app, feature year-round content to keep things going beyond just the actual event dates.

The games officially kick off tomorrow with the opening ceremonies on Friday at 11am ET, so grab the Sochi 2014 app free from BlackBerry World and stay in the know through all the action!