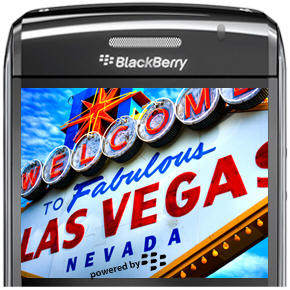 So we're finally done with our CES 2010 coverage. The show is long-since over and it took us a week and a half to get up on the blogs all of the content we flew away from Vegas with. In case you missed any of the news or hands-on videos, be sure to check out our CES 2010 posts and get caught up... I suggest you start with this Ed Hardy video I recorded - it was the first vid I captured at the event and despite trying my darndest, I don't think I topped it for the rest of the show.

I actually got asked just yesterday what my favorite takeaway from CES was this year. In reflecting upon the event and the whole trip itself, I realized it wasn't any one announcement or new product that got me most excited; rather, it was the realization that Sin City literally RUNS on BlackBerry Smartphones. Seriously. When it came to the CES event itself, you saw both a lot of BlackBerrys and iPhones in the hands of the attendees (some android phones and a few new Palm devices were there too), which isn't too much of a surprise. What got me really excited though was the constant presence of BlackBerry Smartphones used by the people actually running Las Vegas. Whenever I went to a place that was bumping, be it Tao at the Venetian, The Bank Night Club at the Bellagio and a ton of different restaurants and shops, all of the busy bodies running around these places whose job it is to keep things moving had their BlackBerry Smartphones in their hands out front and center. Nightclubs especially... pretty much everybody working has a BlackBerry on them. I even spoke to a couple nightclub managers and they told me it was BlackBerry Messenger 5.0 with Groups that holds their places together. These clubs are too loud to talk on a phone or walkie-talkie system, and time is of the essence and it's critical that messages get to everybody at once. It's BlackBerry and only BlackBerry that can handle that mission.

I was also pretty happy about the familiiarty the Vegas locals had with CrackBerry.com. Pretty much everybody I spoke to had known of or visited the site. Always a good thing. Favorite moment? Me and Mickey Papillon (thecellphonejunkie) were walking through the Forum Shops at Caesars heading to Tourneau to ogle some watches when we popped into the Chanel store along the way. I yanked out my Bold 9700 to check a BBM message I had just received and the guy working walked up to me and asked me how I liked the trackpad on it. I said it was awesome and passed him my phone so he could experience the trackpad for himself as he said he had never tried it. He told me he had a BlackBerry Tour and iiked it, but sort of wished it had the trackpad. Then he said, "I hear a new Tour should be getting announced soon so I think I'm going to upgrade to that when it comes out." I asked him where he heard that from. His response?  Oh, just CrackBerry.com. Wicked. :)

Looking ahead to CES 2011, now I find myself not just anxious to get a look at all the cool new gadgets and apps that are bound to emerge, but also to keep tabs on how BlackBerry is doing at running America's Playground. An event like the Smartphone Round Robin makes you aware of all the present and emerging competition there is out there, yet somehow I have a feeling that when a city like Vegas relies so heavily on our beloved BlackBerry, that despite how fierce the competition gets that BlackBerry is here for the long haul, and will not only survive but continue to thrive.