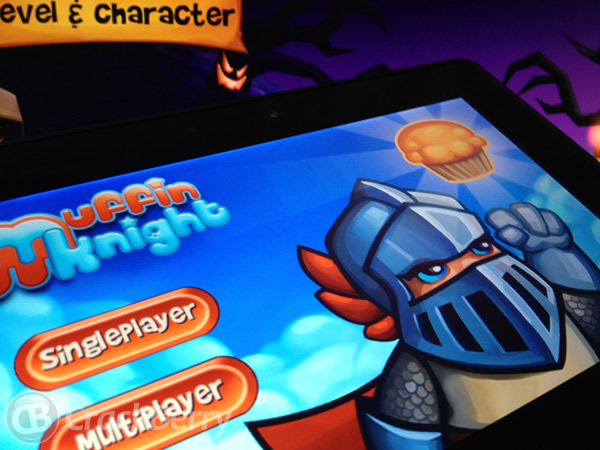 What do you get when you take a knight, a fairy godmother, a few fairy tale characters, and a whole whack of muffins? You get Muffin Knight, one of the newest games for the Playbook from Union and Angry Mob games. Muffin Knight is a fast paced game with creative and colorful graphics. But when your world is filled with crazy goats, and you yourself are morphed with every muffin you eat, it's hard to keep focused on the tasks at hand. Continue reading to see if Muffin Knight is destined for the hall of fame.

While the storyline isn't as captivating as Dead Space or 9mm, Muffin Knight does provide you with a little something to keep your attention. The premise of the Muffin Knight story is,

"Little boy, on his journey to return the old fairy's magical muffins. A strange curse was set on him: with each muffin he touches, he turns into a different creature. The old fairy promises to turn him back into a boy when he gets all the muffins back."

Like I said, it's not a storyline that will be the sole cause of you playing the game, but at least there was some creativity used when developing the game.

Often when I'm buying games for the BlackBerry PlayBook I'm looking at how detailed the graphics are, there's nothing more than playing a HD like game with stunning graphics all in a portable device. A game like Muffin Knight doesn't need graphics like NOVA 2 HD, but oh does it impress. Muffin Knight is almost like an HD cartoon, it's creative enough to keep you entertained, and graphically attractive enough that you don't feel ashamed to have it on your tablet.

Muffin Knight's gameplay is actually quite simple, and your task is to capture as many muffins as you can. Each level has various platforms in which you are able to jump to in order to grab those muffins, but it isn't that simple. As you are attempting to get every muffin in order to level up, a barrage of various creatures rain down on you. These aren't your normal creatures, these ones get angry. As you grab the muffins the creatures will continue trickling down from the sky, and if you let one fall down the hole at the bottom of the level, you're in for it as they become engraged and attempt to take you out.

Muffin Knight has a decent menu system, with the typical sound options (music on/off, sound effects on/off etc.), but they've added a few extra treats. Within the game options, you will have the ability to change the button layout. Changing the button layout will give you the option to place the controls anywhere you would like on the screen. The last option you will have on the game settings page is language selection. On the language selection, you can pick from English, German, French, Italian, and Spanish. The game developers seemed to have provided most necessary game settings, and having the ability to place the controls anywhere on the screen a definite plus.

While most portable game developers go with the online multiplayer route, the developers of Muffin Knight have decided to make their games multiplayer local. This setup means that you will need two BlackBerry PlayBooks connected to the same wifi network to battle it out for the championship. Getting the multiplayer up and running is actually quite easy. To set up the multiplayer, you will need to have both PlayBooks connected to the same Wifi. After they're connected you'll want to launch the game on both devices and select multiplayer. From this point one person will need to select 'create a server' and the other select 'join server'. The game will automatically connect the PlayBooks and the user who created the game can now select the level. Let the multiplayer craziness begin!

Muffin Knight is definitely a game you'll want to have on your PlayBook. With the creative graphics, addictive gameplay, and local wifi based multiplayer, you'll be playing well into the late hours of the day. You also can't beat the price, $1.99. Make sure you check out Muffin Knight for the BlackBerry PlayBook.