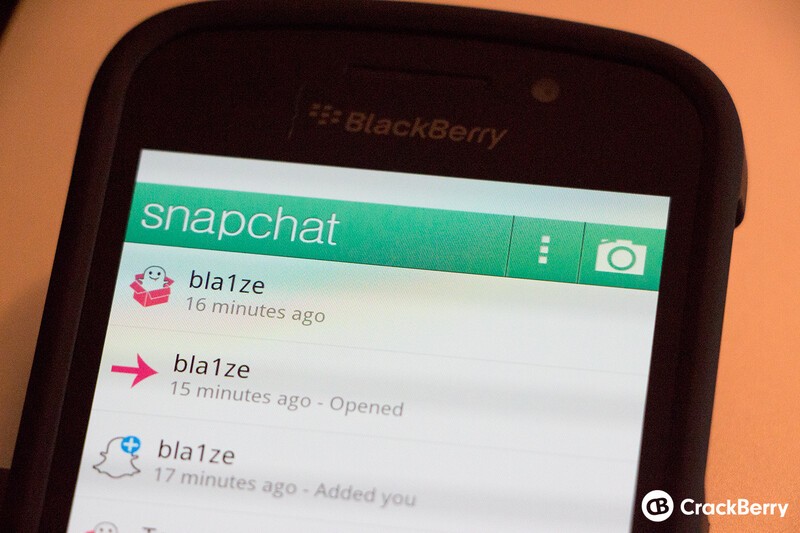 **UPDATE** - Still looking to load Snapchat onto your BlackBerry? Sadly, Snapchat has taken a strong stance against those not running Android or iOS making use of Snapchat and as such, have begun blocking all Snapchat they deem not supported. As such, Snapchat on BlackBerry 10 will not no longer work as it did, even when using the Android version of Snapchat. Some folks have managed to continue using the Android version, but anyone looking to sign in that isn't already logged in through the app simply will not be able to do so. One alternative that does work is an app called Casper. It can be found here. However, we have to advise this is a third-party app not controlled by Snapchat so you use it at your own risk plus, there's no promises it will work forever.

If you're into sending photos to your friends but don't want the files lingering around - Snapchat is the app for you. It's a simple free app that lets you send photos or videos to your contacts with a set expiration time - so they'll have say, 4 seconds to see it before it's no longer available. It's a bit of a novelty but still fun to play around with.

Unfortunately Snapchat is not currently available for BlackBerry 10, but thanks to the hard work of some CB forums members, you can sideload Snapchat to your BlackBerry Z10 or Q10 right now. Overall it works pretty well,  videos don't seem to be working and I did have some issues on my Q10 though like the app not showing the proper camera orientation, so you have to be a bit crafty when taking photos. Other than that I haven't run into any other issues thus far.

If you're into giving it a shot it will take a bit of work but we have help for both Windows and Mac users to get it done. You'll need a bit of time along with some debug tokens for your device, and keep in mind that after you convert the file it will only work for your specified device. You won't be able to send the BAR along to anyone else for their own use as it will be tied to your personal PIN.

Up to the challenge? Head to one of the links below to get started. The directions are pretty straight forward but if you have any issues you can drop a comment here and let us know. If you need help sideloading we've got you covered there as well.