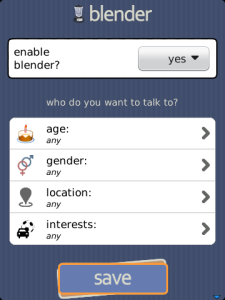 Ever since the addition of the social platform to BlackBerry Messenger we have seen tons of developers continue to incorporate social additions to their applications, one of which being Smoothie from Tafasa. For those unfamiliar with Smoothie, it is a BlackBerry application that allows you to find new friends to begin a conversation with or allow you to join an existing conversation with a group of people already conversing. Since its debut last year, Smoothie has become rather popular amongst BlackBerry users and they have received quite a bit of feedback on how to improve the application. They have been working behind the scenes to incorporate it all.

The recent update to Smoothie which bumped it up to v2.0 brought a whole load of new features and enhancements along with it. Some of these include:

If you are a current Smoothie user you will certainly want to make sure you grab the update, and if you have yet to check it out and want to meet some new BlackBerry users this is a great free way to do so.