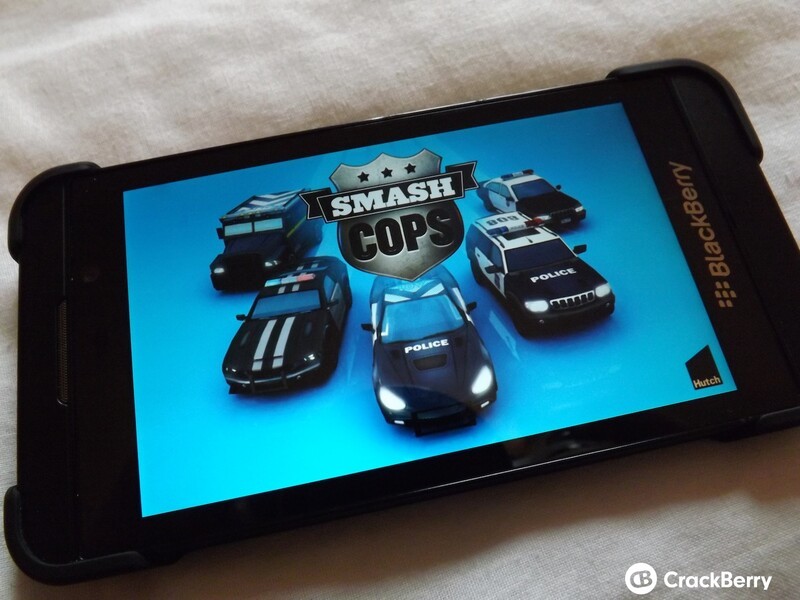 We first looked at Smash Cops when It became available for the BlackBerry PlayBook. BlackBerry Z10 owners can now also download the game and it's one not to be missed. I fell in love with it on the PlayBook and became totally addicted - in fact I'd say it's still my favorite game on the tablet. With sirens wailing and blue and red lights flashing - Smash Cops is likely to suck you in too!

Smash Cops is all about driving a police car and completing a wide range of different missions. Once you launch the game for the first time you'll be taken through a quick tutorial of how to control the car and perform smashes. This is essential as the game is quite unique as far as I have found. The best way to describe the controls is to imagine looking down on the car from above. You then touch the BlackBerry display behind the police car which will make it accelerate. You then slide left and right to perform turns which does take a bit of getting used to, but you soon pick it up. There is an option to use a virtual joy pad but I don't find this as easy to control the car for some strange reason.

If you are chasing a 'bad guy' you can crash into him at any point, but to inflict maximum damage you need to touch the top of the screen which will make you perform a 'Ram'. Although unlimited, you need to wait a short while before you can ram again so you need to time things right. Smashing into the side of a bandit car is going to do more damage than from the rear so you need to get into the right position before making the strike.

As well as chasing the felons you need to ensure you don't crash into too many civilian cars. Your police car has a small green life bar above it which you don't want to let deplete. Also, smashing into other police cars won't do you any favors as when you complete a mission you will be awarded stars, but they will be deducted for 'cop smashes'.

There are 20 missions to complete after the tutorials and they all vary in some way. In some you will need to pursue a car or cars - others will require you to get to a certain point within an specific time and there's even a driving course where you must avoid hitting the cones. They are all as exciting as each other which makes the game so addictive.

As you progress through the levels you will get promoted and other cars will become unlocked. You start with a patrol car but can then move up to a Cruiser, an Interceptor, an Enforcer and then finally 'Brutus' which is a SWAT van. Once all are unlocked you'll need to decide which vehicle is best for each mission if you want to get 5 stars in all of them. Although the Brutus may be strong and powerful, it isn't the quickest car you have so you'll need to weigh up the pro's and con's of each police vehicle in your garage.

If you're looking for a fast paced action game with wonderful graphics and game play it doesn't get much better than Smash Cops. The game will cost you £2.00/$2.99 and if you ask me that's a small price to pay for the hours of action to be had.

If you give it a try feel free to sound off in the comments. Don't blame me though if you can't stop playing it!