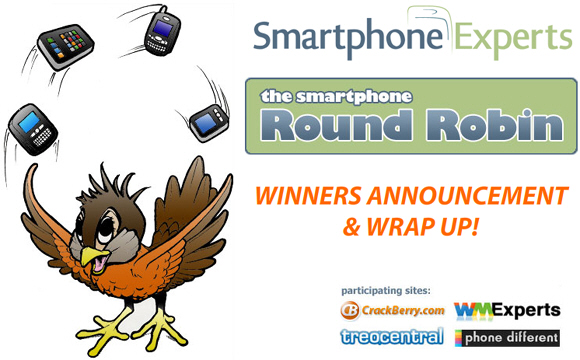 RickMG has won himself a new Smartphone of choice and the Runners Up will each receive $100 to spend in one of the Smartphone Experts stores. You can click on the winners’ names above to see the comments that turned out to be the lucky ones in the final draw. It looks like RickMG is a long-time Treo user (currently on the Treo 755P). Hopefully he'll be smart and take this as the opportunity to upgrade his smartphone to a new BlackBerry! Dieter will be contacting the winners via their registered email accounts to get them their prizes. Congrats to all the Winners and a Big Thank You to everyone who participated in the event.

Smartphone Round Robin Wrap Up

And just like that, the Smartphone Round Robin has come to an end. It was an exciting month (well, I guess we stretched it out to more like six weeks) and a great learning experience. Spending time on the competition’s devices definitely broadened my knowledge and understanding of the smartphone world and from reading through all the Round Robin comments and forum conversations at CrackBerry.com and our sibling sites TreoCentral.com, WMExperts.com and PhoneDifferent.com I think I can safely say the entire smartphone community at large took benefit from the event. There will definitely be a Second Annual Smartphone Round Robin.

To read Mike, Dieter and Jennifer's final thoughts on the BlackBerry Curve 8310 and and some concluding remarks on the Round Robin, read on.

Over the course of Round Robin, the BlackBerry Curve 8310 received a good deal of praise (and a small amount of criticism) from the editors of the other community sites taking part in the Round Robin. Coming to the BlackBerry from their Palm, Windows Mobile and iPhone backgrounds, everyone had great respect for the BlackBerry's ability to simply Get It Done. Considering the BlackBerry is a No Touchscreen device (and the other editors are all regulars of touchscreen smartphones), it was impressive to see how quickly they all became adept at using the Curve.

Mike Overbo from PhoneDifferent.com
The Curve is a pretty neat device.  I had incredibly low expectations for the BlackBerry and ended up pleasantly surprised.  Push email is great.  It's a very solid platform, too -- it does pretty much what you want and with no crashes.  Compared to most other smartphones, the newer BlackBerries are very svelte and sleek.  The build quality on their phone was astounding, and I can see what makes them a top choice for businesses all over.

If you don't want your smartphone to do too much, a BlackBerry is probably your best option.  The things that BlackBerries are designed to do -- push information, email, and make phone calls – the BlackBerry does very well.  Everything else is a bit of a gamble. The internet capabilities beyond mail are a bit weak.  The BlackBerry is pretty much the antithesis of the iPhone, there's not really a lot of overlap between the two.

I don't think that I'd pick one as my personal phone but I wouldn't raise a peep if, say, my job handed one, as long as it was one of their small newer ones (like the Pearl) and wouldn't make a mess of my pockets.  That's a midwestern way of saying that I'd be happy to use one.  BlackBerry would be either my 3rd choice or last choice, vying with PalmOS for my attention.

Jennifer Chappell from TreoCentral.com
The Curve is a real pro in the email department.  It's simple to set up your email accounts and you get your email lightning fast.  The Curve is a zippy device and is quite a beauty too.  The built-in keyboard is great and makes typing emails and text messages simple and fast.  The Curve as a phone worked nicely as well and it was comfortable to hold.  The Curve is small and lightweight.

As much as I enjoyed the trackball and menu key combination because of how well they worked together and made getting around on the device easier, there were times when the scrolling got sort of old.  Luckily that little trackball is fast and smooth.  The user interface was confusing at times. For example when trying to set up the home screen.  There were too many menus to open to get to the required tool.  As a gamer, I was a bit disappointed that the Curve isn't set up to play many games, plus there aren't as many 3rd party apps available compared to the Palm OS.  If using a device one handed is important to you and you want a great emailing device that looks nice and even sports a camera with a built-in flash, go for it.

Dieter Bohn from WMExperts.com
The BlackBerry Curve is about two things: email and simplicity.  It achieves those two things remarkably well - the hardware is great and the interface, though there's a little bit of a learning curve, is speedy.  If you don't need flashy graphics and don't mind scrolling around the screen a bit to get to what you want, the Curve is does a decent enough job letting you find what you need.  Of course, if you're running a business, the BlackBerry is still tops (but ask me again in a year).

As a Windows Mobile user, though, I often found myself chafing under the 'simplicity' part of the Curve.  Email came in automatically with a minimum of configuration, but I couldn't seem to get it set up to work in the way I was used to.  The Curve "Just Works" - meaning it just does what it's designed to do very well, but getting it to do more is sometimes a bit of a chore.  If you want a simple email steak with a healthy side of mixed messaging and tall glass of phone, the Curve is great -- just don't try to order off menu too much.

Kevin Michaluk from CrackBerry.com
As for me, I am Back on the Crack and Loving It! Apparently the old adage "Absence Makes the Heart Grow Fonder" applies to the smartphone realm as well. While the BlackBerry may not have been the most powerful smartphone in the Round Robin (Windows Mobile Tilt) or the  most media friendly (iPhone) or the one with the most available apps (Treo 680), as an everyday communication tool that keeps you connected to your friends, family and business it is simply untouchable. While long time BlackBerry users probably take it for granted, the one-handed usability and speed of executing tasks on the BlackBerry is not to be found on the competition's devices. Reflecting on the past six weeks, using the Tilt, Treo 680 and iPhone in my everyday life was more like a chore instead of the pleasure it is to use a BlackBerry. And for me, I'll take pleasure over chores any day of the week. It's great to be a BlackBerry user. And with time it will get even greater as BlackBerry smartphones will get even more powerful, even more media friendly and have even more 3rd party app support.

>> Read my Coming Home to the BlackBerry Article

The Smartphone Round Robin wasn't about picking a "winner" between the four operating systems and devices. That would be an impossible task as of course Mike, Jennifer, Dieter and myself each think of our "home" devices to be the best (but I am right - BlackBerry IS the best). But if there has to be a winner, then I think the real winner here is the consumer. Thanks to the Round Robin there is now an excellent smartphone resource for people to research when in the market for their first (or next) smartphone. With each platform and device being scrutinized by three editors (and highly endorsed by the fourth!) I think the truth behind each emerged - the pros and cons are there for all to see, as well as the compelling reasons why a particular phone may be right for someone based on their given needs and wants.

With smartphone penetration expected to hit 70 Million devices in the United States alone by 2010, a LOT of people will soon be asking themselves "Which Smartphone is Right for Me?". We'll keep the Smartphone Round Robin Website running live for the long haul, so Spread the Word!!!

See You Next Year!