As I'm winding down my week of using the Treo 680 (final impressions going up later today or tomorrow Monday), Dieter over at WMExperts.com has posted his Initial Impressions of the BlackBerry Curve 8310. 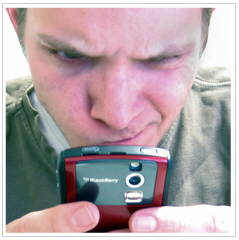 Dieter is an all-around smartphone expert, EXCEPT when it comes to the BlackBerry. He had never used one before, so he came into the Curve as a slightly skeptical blank slate. He even shows his newbie status by writing the plural of BlackBerry as "BlackBerries" vs. the more accepted and in-the-know "BlackBerrys" (if you've ever wondered about this check out our piece on the Great Plural BlackBerry Debate).

Dieter's basic take on the Curve? I'd sum it up by saying he loved the hardware (but prefers the Treo's keyboard), grew to like the OS (but think it lacks compared to others), and appreciated the email capabilities (but did have some issues with it).

Go take a read and let Dieter know how he did! Was he fair? On the money? Totally out to lunch? Remember, a logged-in comment/forum post will get you a chance to win a new Smartphone in our Smartphone Round Robin contest! Read Dieter's First Impressions >>