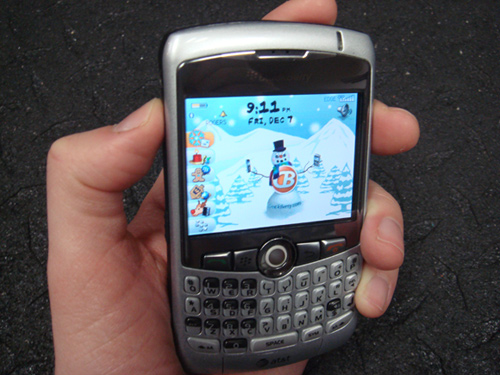 It's Good to Be a BlackBerry User!

Vive le BlackBerry! Wow, does it EVER feel great to be Back on the Crack again. The Smartphone Round Robin has had me going sans BlackBerry Curve for over a month, during which time I used the AT&T Tilt, Palm Treo 680 and Apple iPhone. And while I did manage to get over my initial BlackBerry withdrawal and survive the month on these other smartphones, coming home to my Curve quickly made me realize just how good us BlackBerry users have it. RIM got it right. They sell devices that just work – they are easy to use and get the job done fast and efficiently. BlackBerrys are the ultimate communication tool.

RIM can’t rest on their past successes though… there is still work to do. I come away from the Round Robin with a small wish list of things I want to see on future BlackBerrys, but the fact remains that out of the devices in the Round Robin, I think RIM has the best grasp of how a person actually integrates mobile technology into their daily lives. A device like a smartphone has to begin with everyday usability, and RIM has this equation solved better than anyone. It is the little things that put the Crack in CrackBerry, and because of that, RIM has by far the best foundation to continue building on as we see the next generation of smartphones begin to emerge. To see how I celebrated my return to the BlackBerry and for more final thoughts, Read On!

Don't forget, a comment to this post counts as an entry in the Round Robin Contest! Be sure you're logged in before you comment. The Round Robin comes to an end this Sunday, December 9th at Midnight, so get your final comments and forum posts in for your last chances to win a new Smartphone! Winner will be announced December 12th.

I celebrated the return to my BlackBerry Curve. I figured it was well-warranted after having to neglect ‘My Precious’ (said like Golem) for so long. I wasn’t sure if she’d forgive me for my month long absence, so I took the safe route and showered her with gifts:

So many BlackBerry goodies came out over the past month… I just had to spoil my Curve with some new software and accessories. It’s only been 48 hours, but my CrackBerry Addiction is already back in full swing (did it ever really leave? I think not!).

A New Battery Cover for my Baby was in Order!

While I had the Battery Cover off, I figured a new 6GB MicroSDHC
card would make a nice present to myself and my BlackBerry.

FlipSide MP3 Player Brings CoverFlow to the BlackBerry - it's cool.
I've decided anytime I show an Album cover on this site, it will
always be of Gordon Lightfoot. Gord is cool.

The CrackBerry.com Holiday Zen theme. We'll be giving this away in
a couple of days for FREE as our little present to you. Just getting
some final touches taken care of. But it's looking great!

I tried to be really fair during the Round Robin and keep my articles from becoming too biased in favor of the BlackBerry. If you haven’t checked out the previous Round Robin articles, you may want to do so before moving on:

Back in September, the first BlackBerry 101 article I wrote was called Why BlackBerry? and in it I went through some of the reasons why choosing a BlackBerry over other smartphones on the market would make good sense for most people. At the time, I wrote the article based on what I thought was logical assumptions – I had not actually used any other modern day smartphone other than the BlackBerry. Thanks to the Round Robin I have gained hands-on experience with the competition and upon reflection can honestly say that first lecture was and still is right on the money. If anything, I am now that much more adamant about the arguments of why choosing a BlackBerry over another smartphone is the way to go. Check out the Why BlackBerry? post for more details, but here’s what I consider to be some of the CrackBerry’s most important selling points:

The competition isn’t totally unfortunate. While the BlackBerry is by far the most usable, all-encompassing smartphone package on the market today, there were some features from the other phones in the Round Robin that gave cause for me to feel envy.

You Can Visit the Round Robin Website Anytime. It's a great resource for those
in the market for a new smartphone. Lots of perspective from different mobile users!

From the AT&T Tilt:

From the Apple iPhone:

I’m going to Cuba for vacation from December 31st to January 7th. As it stands, I’ll have to take both my BlackBerry and laptop with me in order to stay on top of things. However, if we took the wish list above and crammed into my Curve, I would be able to leave my laptop at home. That’s what I want to see in my BlackBerry – the ability to do everything I need to do at my fingertips. I think the race is on to make that happen in the smartphone world (while retaining usability and battery life!) and the competition is not sitting still. I hope when it comes time for the Second Annual Smartphone Round Robin that the BlackBerry I am using won’t be just a Palm or iPhone or Windows Mobile killer… I want it to be a laptop killer!