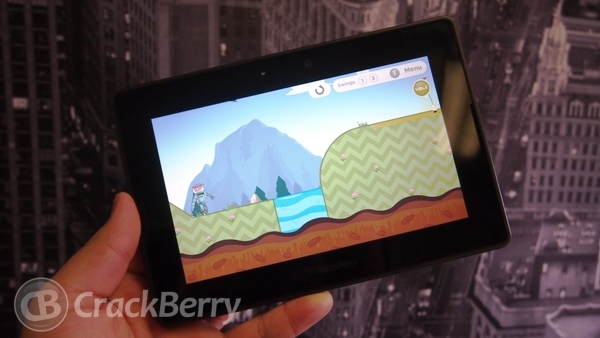 As you may have heard our beloved BlackBerry PlayBook tablet received a software update last week to version 2.0, bringing along a whole bunch of new features like email, calendar, and contacts. With the update we've also seen an influx of applications being brought over to the tablet, but we can't forget the ones that have been there from the beginning. BoltCloud just let us know that in celebration of the launch of PlayBook OS 2.0 they are putting their PlayBook Game Sling Golf on sale this week in App World.

For those unfamiliar with the game, Sling Golf is a golf style game that takes out the human aspect, and instead you play with robots, monkeys and monsters. If you've never tried the game I recommend getting the trial, or just hop on the price drop bandwagon while its available. The folks at BoltCloud have unlocked the Winter Wonderlands course in the lite version for everyone to enjoy, and to get a good taste of just how awesome the game really is. Sling Golf is now available for $1.99, down from $2.99 and for this week only so grab the link to app world and get golfing on your BlackBerry PlayBook.